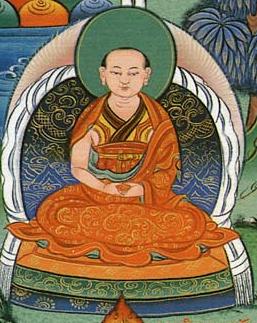 Jikme Gyalwe Nyugu was born in 1765 in the Dzachukha valley. As a child, he experienced a strong desire to go to solitary places and devote himself to meditation. In his youth he made a pilgrimage to Lhasa and Samyé and other sacred places and received instructions on Dzogchen, but was still obliged to accompany his elder brother on business trips. The dishonesty he encountered on such trips filled his mind with revulsion for samsara. Around this time he received teachings from Getse Lama Tsewang Rigdzin Gyatso on Tertön Nyima Drakpa’s Tsasum Sangwa Nyingtik.

Later, when his brother died at the age of eighteen, this more than any other single event turned his mind resolutely to the Dharma. Nevertheless, his relatives put pressure on him to marry and take care of the family. Eventually fleeing his home, he went to see the Third Dzogchen Rinpoche, before travelling to Central Tibet with Barchung Gomchung Rigdzin. At Samyé they met with the First Dodrupchen Rinpoche who advised them to visit Jikme Lingpa. When they reached Tsering Jong and met Jikme Lingpa for the first time, Jikme Gyalwe Nyugu felt incredible joy. They received empowerments, transmissions and detailed instructions on Dzogchen.

In carrying out Jikme Lingpa’s instructions to visit the sacred mountain of Tsari and to meditate there, Gyalwe Nyugu suffered extreme hardship, but was sustained by the memory of his root teacher. During a six-month retreat he realised the ultimate nature of mind through the blessing of the lama and the accomplishment of the yidam.

After several more retreats in east Tibet he returned to Tsering Jong and experienced once more the great joy of seeing the omniscient Jikme Lingpa, who invited him to stay for three years. He explained frankly that he had to go back home because of obligations. He returned to Kham and did many years retreat around Dzogchen Monastery and in Dzachukha and had many extraordinary experiences. For twenty years he stayed in caves in the Trama valley in upper Dzachukha, eventually becoming known as the 'Hermit of Dzachuka' and Dza Trama Lama. He lived under extremely austere conditions, sometimes under a rocky ledge, or even out in the open.

As advised by Jikme Lingpa, he devoted the entire latter part of his life to teaching whoever came to listen, giving empowerments or meditation instructions to all who were devout and sincere. During this period, he gave Patrul Rinpoche teachings on the ngöndro of Longchen Nyingtik no less than twenty-five times, as well as teachings on tsalung practice and Dzogpachenpo. His instructions on the preliminary practices are recorded in Patrul Rinpoche's famous Words of My Perfect Teacher.

His main immediate reincarnation was Kunzang Dechen Dorje. Another incarnation was born in the encampment of Khamgar and was enthroned with the title 'Khamtrul'.