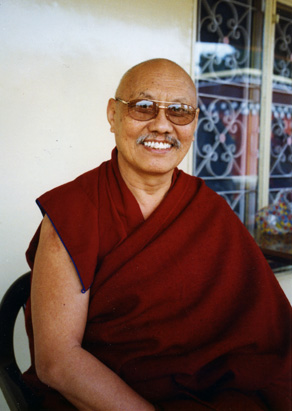 The position of Head Abbot of Ngor Monastery was traditionally held for a three year period in which extensive teachings are given almost non-stop. The three year periods alternate between the four monastic Houses (Tib. labrang)—Luding, Khangsar, Thartse and Phende. Due to the Chinese take-over of Tibet in 1959 and the disruption to the Ngor monastic system, His Eminence Luding Khenchen Rinpoche effectively led and maintained the Ngor school up to 16th March 2000. It was then that Luding Khenchen Rinpoche's nephew and the son of Jetsün Kushok Chimey Luding—Luding Shabdrung Rinpoche—was enthroned at Ngor Pal Ewam Choden Monastery, Manduwalla, India, as the 76th abbot of the line.