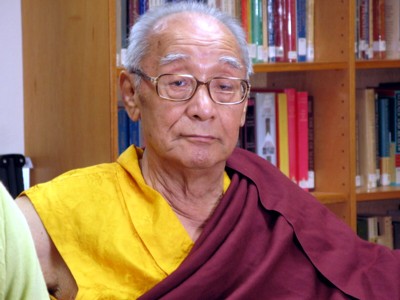 His Holiness Jigdal Dagchen Sakya Rinpoche (Tib. འཇིགས་བྲལ་བདག་ཆེན་ས་སྐྱ་, Wyl. 'jigs bral bdag chen sa skya) (1929-2016)[1] was born into the Phuntsok branch of the Khön lineage of the Sakya school in southwestern Tibet and was the most recent head of the Phunstok Podrang.

Under the guidance of his father, H.H. Trichen Ngawang Thutop Wangchuk (the 40th throneholder of the Sakya school), and other distinguished teachers, he received instructions in all the teachings of the sutras and tantras. Upon completion of his training, he received the unbroken Khön lineage transmission of the Sakya Vajrakilaya and Hevajra empowerments and the complete Lamdré Tsokshé, which are the main teachings of the Sakya tradition. Following this he went into a long series of study and meditation retreats. He then conferred the Lamdre Tsokshé on the monks, nuns, and lay people of Sakya.

After the passing of his father, Dagchen Rinpoche took a leave of absence as ruler of Sakya in order to travel to East Tibet, where he studied with Jamyang Khyentse Chökyi Lodrö and Dilgo Khyentse Rinpoche. After completing his major studies, Dagchen Rinpoche bestowed empowerments and teachings throughout East Tibet and established 17 Sakya colleges and 10 retreat centers in that region. In 1955, he conferred the Lamdre Tsokshé, for a second time, to over 1200 practitioners in Minyak, East Tibet.

In 1959 Dagchen Rinpoche, his wife H.E. Dagmo Kusho Sakya, and their family were forced to flee to India, where Dagchen Rinpoche became the Sakya representative to the Tibetan Religious Office in Exile, which was instrumental in arranging for the resettlement of Tibetan refugees. The following year he was invited to participate in a research project on Tibetan civilization at the University of Washington sponsored by a Rockefeller Foundation grant.

Dagchen Rinpoche resided in Seattle since 1960 along with his wife, five sons and other family members. Appreciating the benefits of American freedom and prosperity, he worked actively to help preserve and share the Tibetan Buddhist tradition. To this end he gave extensive empowerments and teachings throughout the United States, Canada, Europe and Asia.

In 1974 Dagchen Rinpoche co-founded with Dezhung Rinpoche the original Dharma Center called Sakya Tegchen Choling. In 1984, the group reorganized and the name Sakya Monastery of Tibetan Buddhism was adopted. H.H. Jigdal Dagchen Sakya established Sakya Monastery as a seat of cultural and religious learning in the West.