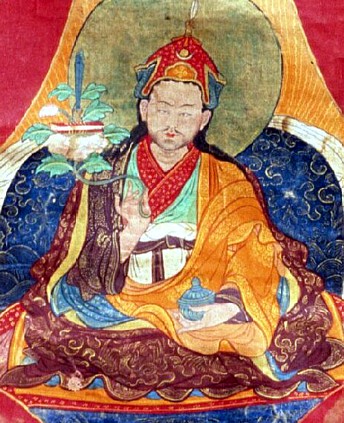 This cycle focuses on the dharmakaya Amitayus, sambhogakaya Ngensong Dongtruk (a form of Avalokiteshvara), and the nirmanakaya Padmasambhava together with the twelve emanations of Guru Rinpoche.


Tukdrup Barché Kunsel is a practice that was composed by Guru Rinpoche himself. How did this come about? It was during the time when Guru Rinpoche was in Tibet, in the Blazing Turquoise Shrine on the second floor of Samyé monastery, in response to a request from the king Trisong Detsen who was Manjushri in person, his son Prince Murub Tsepo Yeshe Rolpa Tsal, the vajra consort of Guru Rinpoche Khandro Yeshe Tsogyal, the tantrika Nupchen Sangyé Yeshé, the translator Lotsawa Gyalwa Chokyang, and many other disciples. They said that Dharma practitioners face many obstacles, and asked what the best practice would be for dispelling these obstacles. Guru Rinpoche said that when practising the Dharma there will be outer, inner and secret obstacles. “But,” he said, “when it comes to dispelling these obstacles, there is no greater method than praying to the lama. The buddhas of the past, present and future have not taught, are not teaching and will not teach a greater method than this.”

The disciples, including the Lord Trisong Detsen, the subject Vairotsana and the friend Yeshe Tsogyal, reflected and thought about what Guru Rinpoche had said. They saw that it was true, and that there was not any practice for removing obstacles greater than praying to the lama. Then they thought, “Our root teacher, who took birth intentionally in the form of a vajra master, is Guru Rinpoche. He is the one who has granted us empowerments and teachings. He himself has said that just as the deity who has a special karmic connection with Tibet is Avalokiteshvara, he is the master especially connected with Tibet. Out of compassion and as a result of aspiration prayers made in the past, he took birth deliberately to train beings in this land. So for us the lama is definitely Guru Rinpoche. And therefore we need a special method for praying to him.” With this in mind, they requested Guru Rinpoche to teach them such a practice.

At that time Guru Rinpoche said, “By praying to the lama all obstacles will be dispelled, and when they are dispelled, you will receive the accomplishments.”

When the disciples requested a method for praying to Guru Rinpoche, he agreed to grant it. He placed his right hand on the head of Yeshe Tsogyal, his left hand on the head of king Trisong Detsen and he touched his own forehead to the forehead of Prince Murub Yeshe Rolpa Tsal. Then he recited the prayer of Barché Lamsel, the self-sound of dharmata, which begins:

When he had granted this previously unknown prayer, the disciples all thanked him, but then they said, “We suspect that there is also a method of accomplishment (sadhana) related to this, complete with activity practices. Please could you teach this not only for us disciples here now, but especially for beings in the future who have devotion to Guru Rinpoche.” With this, they offered him their bodies, wealth and possessions and requested him to teach this practice.

Then at that very moment, Guru Rinpoche transformed and assumed the form of Nangsi Zilnön, ‘The Master Prevailing Over All that Appears and Exists’, the chief of the mandala, surrounded by the other deities such as Tsokyé Dorjé (‘Lake-born Vajra’), Padmasambhava and all his various manifestations. Above his head was the sambhogakaya four-armed Avalokiteshvara, and then the dharmakaya Amitabha. All around him were the twelve emanations of Guru Rinpoche, and at the four gates of the mandala were the four dakas together with their consorts. He emanated this whole mandala directly and granted the disciples the empowerment.

All the disciples received this empowerment there and then, took it into their experience, and then expressed their gratitude to Guru Rinpoche. They realized that through this practice it is possible to eliminate all obstacles and thereby receive all accomplishments. In the actual text of this terma Guru Rinpoche speaks in some detail about its qualities and the benefits, but on this occasion I will just quote the following lines:

If we make a connection with a Dharma for eliminating all obstacles like this,
And practise approach and accomplishment that is excellent indeed,
But even if we forge some slight connection,
Then all obstacles—outer, inner and secret—will be eliminated,
And the door to the lower realms will be closed forever.
If it proves otherwise, I Padma, have deceived the beings of the future.

When he made this proclamation, Yeshe Tsogyal felt her devotion increase tremendously. With her unfailing memory she was able to recall every word that Guru Rinpoche spoke on this occasion. She asked Guru Rinpoche whether it would be best to spread these teachings straight away or to keep them for the sake of future generations. In reply, the Guru said, “Just now this is a fortunate time and I Padma am here teaching in Tibet. Now is the time for practising these teachings on your own, not for spreading them widely.” Then he prophesied the lives of Chokgyur Lingpa and Jamyang Khyentse, and said that at that time in Tibet other teachings would lose their power on account of samaya breakers, and that that would be the time to spread these teachings. He advised them in precise detail about the exact location where these teachings should be concealed and exactly how they should be hidden.

Yeshe Tsogyal wrote everything down on a white scroll with her own rakta in the secret dakini script. Then before he left for the land of the rakshasas, Guru Rinpoche examined the terma site of Danyi Khala Rongo and made sure there would be no obstacles. It was finally concealed there twelve years after he departed from Tibet. Then centuries later Chokgyur Lingpa discovered this terma at the age of about twenty-six or twenty-seven, and deciphered it together with Jamyang Khyentse Wangpo.