Difference between revisions of "A Great Treasure of Blessings" 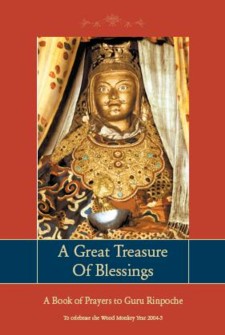 Published by Dharmakosha for Rigpa, to celebrate the Wood-Monkey Year 2004-5 (Translated and edited by Rigpa Translations)

This book has also been translated into French and German

A supplement containing the origins of the Le'u Dünma (The History, the Background and How the Prayers Came into Being) was also published later in three languages.

I am present in front of anyone who has faith in me,

Just as the moon casts its reflection, effortlessly,

In any vessel filled with water.

Introduction: Padmasambhava by His Holiness the Dalai Lama

The Life of Guru Padmasambhava

The Prayer to Guru Rinpoche for Removing Obstacles and Fulfilling Wishes

The Prayer to Guru Rinpoche for Attainments

The Heart of Blessings—A brief anthology of prayers to Guru Rinpoche and the twenty-five disciples, the king and subjects