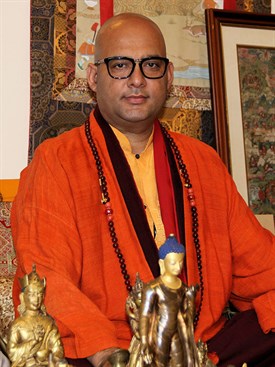 In 1966 the present Choegon Rinpoche, Thutop Choekyi Wangchuk, took birth in a yogic family in the remote Himalayan town of Kinnaur. At the age of six, he was recognised by His Holiness the Karmapa and His Eminence Khamtrul Rinpoche as the ninth Choegon Rinpoche. His main teachers were Khamtrul Rinpoche, who gave him the main Drukpa Kagyu Lineage, and Dilgo Khyentse Rinpoche, who gave him teachings from the four schools of Tibetan Buddhism. He also received the complete Drukpa transmission from Adeu Rinpoche. After completing his training, Choegon Rinpoche served as the vajra master of Khampagar Monastery for eight years, and as the monastery's president for three years.