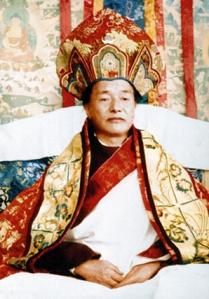 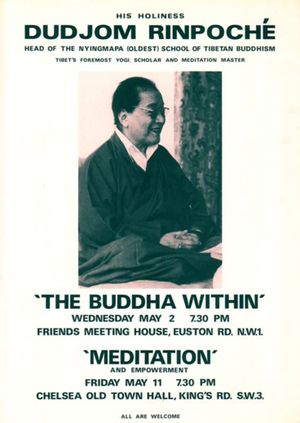 Kyabjé Dudjom Rinpoche or Dudjom Jikdral Yeshe Dorje (1904-87) - one of Tibet’s foremost yogins, scholars, and meditation masters. He was recognized as the incarnation of Dudjom Lingpa (1835-1904), whose previous incarnations included the greatest masters, yogins and panditas such as Shariputra, Saraha and Khye'u Chung Lotsawa. Considered to be the living representative of Padmasambhava, he was a prolific author and revealer of the ‘treasures’ (terma) concealed by Padmasambhava. A prolific author and meticulous scholar, Dudjom Rinpoche wrote more than forty volumes, amongst the most well-known of which are his monumental Fundamentals and History of the Nyingma School. Over the last decade of his life he spent much time teaching in the West, where he helped to establish the Nyingma tradition, founding major centres in France and the United States.

In his youth, Dudjom Rinpoche studied with some of the most outstanding masters of the time. He began his studies with Khenpo Aten in Pemakö, before attending some of the great monastic universities of Central Tibet—such as Mindroling, Dorje Drak and Tarjé Tingpoling—and East Tibet—such as Kathok and Dzogchen. But it was to Mindroling that he returned to perfect his understanding of the Nyingma tradition. Foremost among his many teachers were Phungong Tulku Gyurmé Ngedön Wangpo, Jedrung Trinlé Jampa Jungne, Gyurme Phendei Özer and Minling Dordzin Namdrol Gyatso.

After leaving Tibet, Rinpoche settled first in Kalimpong, in India, and later in Kathmandu, Nepal. At a time when it seemed threatened with extinction, he played a key role in the renaissance of Tibetan culture amongst the refugee community, both through his teaching and his writing. He established a number of vital communities of practitioners in India and Nepal, such as Zangdok Palri in Kalimpong, Dudal Rapten Ling in Orissa, and the monasteries at Tsopema and Boudhanath. He actively encouraged the study of the Nyingma Tradition at the Tibetan Institute for Higher Studies in Sarnath, and continued to give teachings according to his own terma tradition, as well as giving many other important empowerments and transmissions, including the Nyingma Kama, the Nyingma Tantras and the Treasury of Precious Termas (Rinchen Terdzö).

In the final decade of his life, in spite of ill-health and advancing years, he devoted much of his time to teaching in the West, where he successfully established the Nyingma tradition in response to the growing interest amongst Westerners. He founded many major centres including Dorje Nyingpo and Orgyen Samye Chöling in France, and Yeshe Nyingpo, Urgyen Chö Dzong and others in the United States. During this historic period, he tirelessly gave teachings and empowerments, and under his guidance a number of Western students began to undertake long retreats. Dudjom Rinpoche also travelled in Asia, and in Hong Kong he had a large following, with a thriving centre which he visited on three occasions.

Over the years that followed, Dudjom Rinpoche conducted a number of summer retreats at Urgyen Samye Chöling in France. Eventually, `the wanderer, Dudjom’, as he sometimes used to sign himself, settled with his family in the Dordogne area of France, and there in August 1984 he gave his last large public teaching.