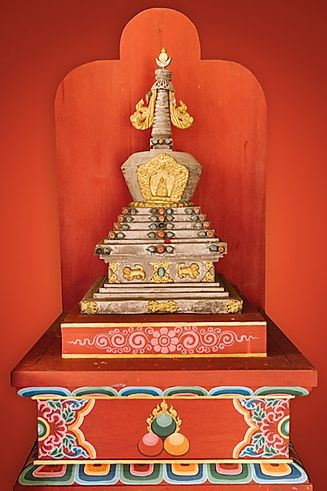 Gyurme Ngedön Wangpo was born in eastern Tibet, in the region of Derge. He was recognised as the senior of the two tulkus associated with the Khung monastery, in Dzapuk[1]

As the age of 6 or 7, he went to Shechen Monastery and studied with Ontrul Tutop Namgyal and other teachers. When he was 15, Gyurme Ngedön Wangpo met Jamyang Khyentse Wangpo and studied with him for 7 years, receiving the entire range of methods of the sutras and tantras, and in particular the Longchen Nyingtik.

Becoming a Chödak of Dudjom Lingpa

”Now return to your home country and in time go to see Dudjom Lingpa. You have a karmic connection with him from past lifetimes, so meeting him will be enormously useful to the teachings and to beings”.

He then gave to the junior Pikhung tulku all his responsibilities and property of the administrative estate, and went back to the lower Ser Valley, in eastern Tibet to seek an audience with Dudjom Lingpa. When he met him “Due to their karmic connection in previous lifetimes, their meeting was like a reunion of father and son”.

Gyurme Ngedön Wangpo received from Dudjom Lingpa the full transmission of the major cycles of termas of the Dudjom Tersar:

Dudjom Lingpa empowered him as the Chödak of these cycles and invested him as one of his heart sons.

Gyurme Ngedön Wangpo wrote numerous commentaries on the Dudjom Tersar tantras and practices and especially “The Sharp Vajra of Awareness”. Many times, Dudjom Lingpa had said to his students how he would have wanted to go to the hidden land of Pemakö. So when he passed away in 1904, Gyurme Ngedön Wangpo oversaw the practices made with other senior students, and then left Golok and made the long journey to Pemakö with other senior students, such as Ling Lama Chöjor Gyatso and Lama Khedrup.

Arriving in Pemakö, they identified the reincarnation of their master: Dudjom Rinpoche, who was three years old.

Gyurme Ngedön Wangpo spent sixteen years of his life in Pemakö and gave to the young Dudjom Rinpoche all the empowerments, oral transmissions, and sacred teachings of the Dudjom Tersar lineage.

According to Nyoshul Khen Rinpoche:

”At a certain point, Gyurme Ngedön Wangpo directed his enlightened intent toward his final act to benefit others. Amid a great, boundless display of amazing signs […], his emanated form resolved back into the supreme inner illumination of primordial beings. His students had his body cremated on a pyre, and the subtle essence of his remains — his heart, tongue and eyes— blended together to form an image of the aspect of Padmakara know as Guru Dewachenpo. This image resides as the inner support of Mahakoti Monastery in Pemakö”.

According to Tulku Orgyen Phuntsok[2]:

Gyurme Ngedön Wangpo 's sacred relics were enshrined in a reliquary stupa, which initially remained in Khorlo Dratsang. During the political events of 1959, in accordance with the aspiration of Dudjom Rinpoche, the tantrika sangha community in upper Pemakö came to an end and migrated to lower Pemakö, to Deden Tashi Chöling, the retreat land in Yoldong established by Togden Kunzang Longrol.
Dudjom Rinpoche had repeatedly expressed the importance of these sacred objects for the entire Hidden Land of Pemakod, and entrusted them to Togden Kunzang Longrol explaining the significance of this guardianship for the future.
With much hardship, Tokden Kunzang Longdrol was finally able to transport the sacred reliquary stupa and many other sacred objects to his land in Yoldong, lower Pemakö, India, where the Khorlo Dratsang tantrika sangha continued its practices uninterruptedly. In fulfillment of Dudjom Rinpoche's aspiration, Tokden Kunzang Longdrol built the [[Deden Tashi Chöling] temple, and ever since, the sacred reliquary stupa of Gyurme Ngedön Wangpo has been enshrined as one of the main sacred objects in the temple.