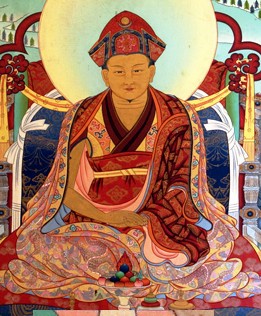 The supreme master Shechen Gyaltsap Gyurme Pema Namgyal was born in a place called Dzokyi Tsolung, which belongs to the regions of Lhatok and Derge, in the Iron Sheep year of the fifteenth calendrical cycle (1871). His father, Sherab, belonged to the Adro clan and his mother, Namkha Drolma, was the daughter of a family of Drongpa officials.

He was recognized by Jamyang Khyentse Wangpo as the reincarnation of Orgyen Rangjung Dorje, given the name Gyurme Pema Tenzin Khedrup Gyatsö’i De, and ceremoniously installed on a great Dharma throne as the fourth Gyaltsap, or ‘regent,’ of Shechen Tennyi Dargye Ling monastery. From his own uncle, Pema Wangchen—or Kyi Yang as he was widely known—he learned how to read and received teachings on the common sciences, including The Mirror of Poetics, the three systems of Sanskrit grammar (known as Kalapa, Chandrapa and Sarasvata), The Treasure Mine of Composition, the major texts of the ‘white’ and ‘black’ astrological traditions and so on.

From Jamgön Khyentse Wangpo, he received empowerments and instructions on the practices of the Nyingma kama and terma, such as Kagyé, Lama Gongdü and Vajrakilaya. He also studied many traditions of the Sarma schools of secret mantra, including Jé Rinpoche’s Great Exposition of the Stages of the Path (Lamrim Chenmo) and Karmapa Rangjung Dorje’s Pointing Out the Dharmakaya. He received the ripening empowerments, liberating instructions and supporting transmissions for the Treasury of Precious Termas (Rinchen Terdzö) from Jamgön Kongtrul Lodrö Thayé and Zurmang Trungpa Rinpoche, Karma Chökyi Nyinché. The sublime Kongtrul Rinpoche also bestowed on him an explanatory reading transmission for all three volumes of his Treasury of Knowledge (Sheja Dzö), from the opening verses of homage through to the colophon at the end. Kongtrul Rinpoche placed the texts on his head and granted him formal permission to transmit these teachings in future.

The writings of this great master fill thirteen volumes and can be summarized in sections equal in number to the stages of realization, or bhumis:

The exact names of the different texts are given in the index to his writings, The Garland of Jewels.

--Written out of devotion by Thubten Nyima.