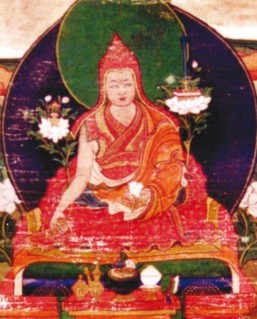 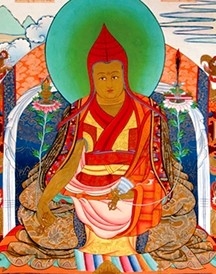 Jamyang Khyentsé Wangpo (1820-1892) also known as Pema Ösel Do-ngak Lingpa- a major treasure revealer—the last of the Five Sovereign Tertöns—and one of the most eminent masters of the nineteenth century. He was a contemporary of Chokgyur Lingpa (1829-1870) and Jamgön Kongtrul the Great and was regarded as the combined reincarnation of Vimalamitra and King Trisong Deutsen. He became the founder of the Rimé (ecumenical) movement. He was also known as Pema Ösal Dongak Lingpa, Dorje Ziji Tsal, Jigpa Mepé Dé, Tsokyé Lama Gyepé Bang, Kunkyen Lama Gyepé Bang, Jikmé Khyentsé Dökar, Kunga Tenpé Gyatsen, Manjugosha, Jamyang Lama.

Jamyang Khyentse was born in the region of Yaru Khyungchen Drak in Dilgo in Derge, East Tibet, on the fifth day of the sixth Tibetan month of the Iron Dragon year during the fourteenth sexagenary cycle. His father was Rinchen Namgyal, a secretary in Derge belonging to the Nyö clan, and a descendant of Drikung Changchub Lingpa. His mother Sönam Tso was a daughter of Gerab Nyerchen Göntse of the Sogmo family.

Jamyang Khyentse learnt to read at the age of four or five, and from an early age his intelligence grew so keen he was able to master reading, writing and other skills without any difficulty. At twelve, he was recognized by Thartse Khenchen Jampa Kunga Tendzin as the incarnation of the great khenpo of Evam Tharpatse, Jampa Namkha Chimé, and he was given the name Jamyang Khyentse Wangpo Kunga Tenpé Gyaltsen Palzangpo. At twenty-one, he received full ordination from Minling Khenchen Rigdzin Zangpo. In all, he had more than one hundred and fifty teachers, who were great masters from all four major schools — Sakya, Geluk, Kagyü and Nyingma — from the regions of Ü and Tsang, as well as eastern Tibet, including Minling Trichen Gyurme Sangye Kunga, Shechen Gyurme Thutob Namgyal, Sakyapa Dorje Rinchen and the great khenpo brothers of Thartse, as well as many other exponents of the scriptures learned in the five sciences.

All that he himself had received of the sutras, tantras and pith instructions, he passed onto his disciples in accordance with their own inclinations and karmic fortune. By continuously giving empowerments, transmissions and teachings, he ensured that his followers were thoroughly grounded in the complete non-sectarian teachings of the Buddha, and established many on the path of maturation and liberation. The most important of his many countless disciples who were holders of the teachings were Kongtrul Yönten Gyatso, Ju Mipham Jamyang Namgyal Gyatso, Dodrupchen Jikmé Tenpé Nyima, Terchen Chokgyur Lingpa and many other learned and accomplished masters of the Nyingma school; the great Sakya throneholder Tashi Rinchen, Zimok Rinpoche of Nalendra monastery, many of the venerable khenpos of Ngor and many other precious masters of the Sakya tradition; the fourteenth and fifteenth Gyalwa Karmapas, the tenth and eleventh Situ Rinpoches, Taklungma Rinpoche and other holders of the Kagyü teachings; Könchok Tenpa Rabgyé, the great Nomihan of Drakyab, Lithang Khenchen Jampa Phuntsok, Horkhang Sar Gyalwa and other great geshes of the Riwo Gendenpa tradition, as well as many other studious scholars and renunicate meditators, as well as holders of the teachings of the Yungdrung Bönpo tradition.

Bringing to an end such vast and magnificent deeds, he demonstrated passing into nirvana on the twenty-first day of the second month of the Water Dragon year during the fifteenth sexagenary cycle.

Moreover, it was this great master who was responsible for arranging the major collections such as the Compendium of Sadhanas, and it was through his enlightened activity that Jamgön Kongtrul Rinpoche’s Five Treasuries, Pönlop Loter Wangpo’s Compendium of Tantras and Palyul Gyatrul Dongak Tenzin’s Collection of the Twenty-seven Mandalas of the Nyingma Kama were all compiled and edited. So it was that his enlightened activity continued, bringing all these teachings to his own fortunate followers and so many other students of the Dharma.

--Composed by the devoted Thubten Nyima