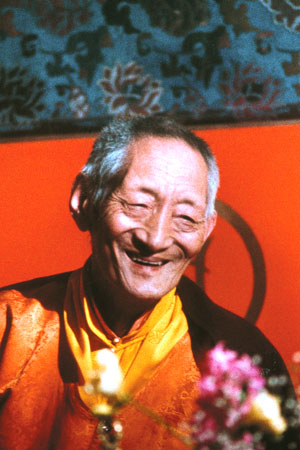 Kalu Rinpoche (Wyl. ka lu rin po che) or Karma Rangjung Kunkhyab (ka.rma rang byung kun khyab) (1905-1989) was a promiment teacher of the Karma Kagyü and Shangpa Kagyü traditions, who taught extensively around the world, and established many Dharma centres in Europe and North America. He also initiated a project to translate Jamgön Kongtrul's Treasury of Knowledge into English. He was also Sogyal Rinpoche's uncle. In fact, Sogyal Rinpoche was delivered by Kalu Rinpoche's own brother, who was called Ratak Sogyal.