Difference between revisions of "Khandro Tuktik" 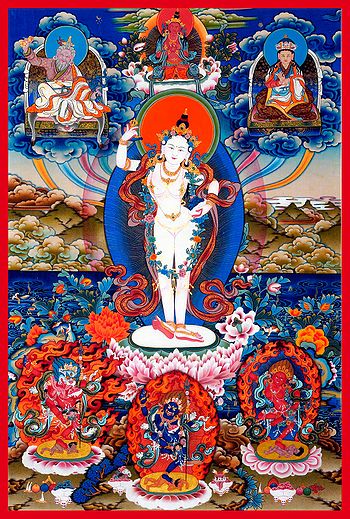 Khandro Tuktik (Wyl. mkha' 'gro'i thugs thig) ‘The Dakini Heart Essence’, aka ‘Treasury of Accomplishments: The Practice of the Profound Path of the Dakini [Yeshe Tsogyal]’ is a terma of Dudjom Rinpoche, revealed as a gongter in 1928. It is the main dakini practice of the Dudjom Tersar lineage, and one of the four main terma cycles of Dudjom Rinpoche[1].

According to Lama Tharchin Rinpoche[2]:

The root text of the Khandro Tuktik, “The Profound Path of the Dakini’s Heart Essence”, arose as the mind treasure of Dudjom Rinpoche. It is the practice of the dakini Yeshe Tsogyal in her outer, inner, secret, and innermost secret forms. Related to this cycle, Dudjom Rinpoche provided a commentary on the four stages of practice: kyerim, tsa-lung, thablam, and the dzogchen practices of trekchö and tögal.
For those practitioners operating from conceptual mind, kyerim practice offers a skilful path leading from the realm of dualistic concepts into non-dual wisdom mind. While our ordinary dualistic concepts build karma, using these same concepts through creation stage practice allows us to build wisdom habit, which culminates in indestructible wisdom body, inexpressible wisdom speech, and un-deluded wisdom mind. This then becomes the foundation for the other three stages of practice. Through practicing with this kind of wisdom phenomena, we can attain the state of fully enlightened Buddhahood in this very lifetime. Even if we do not attain that state in this lifetime, then we can be certain to recognize the true nature of the deity in the bardo after death. Ordinary sentient beings have no concept of wisdom deity phenomena and easily become frightened and confused in the bardo. This creation stage practice eliminates that fear and confusion. In addition, during this lifetime, it helps to clear all obstacles allowing us to receive the ordinary and extraordinary siddhis, enabling us to gain the accomplishment of great wisdom power.

The Khandro Tuktik is a dakini practice focused on Yeshe Tsogyal. The outer form of the dakini is Yeshe Tsogyal, the inner form is Kurukulle, the secret form is Senge Dongma and the innermost form is Tröma Nakmo. According to Lama Dechen Wangmo : ‘Concerned only with the mandalas of the enlightened feminine, these instructions and trainings span the three internal tantra-yogas of mahayoga, anuyoga, and atiyoga[3].

I was twenty-five . It was the tenth day of the waning half of the tenth month in the Earth Dragon year [1929]. Trulshik Pawo Dorje, urged by the Dakinis, arrived unexpectedly and said, “You have to write a very concise and precise dakini sadhana right now”. I had been thinking to write just such a sadhana and had considered taking some time as usual to compose it, but when he said this, the complete sadhana and its meaning arose instantly and clearly in my mind. Without moving from my cushion ro changing the words as they came, I wrote them down. Although it could be regarded as a mind terma, I never called it that. I handed it to him on the spot.

According to Lama Dechen Yeshe Wangmo[5]:

Trulshik Pawo Dorje repeatedly asked me to set down in writing the outer, inner, and secret instruction sections of the practice that would round out the cycle. I couldn’t bear the constant disturbance to my ear, so I added many branch practices related to the original.
Later, a connection to this profound teaching arose for a highly placed Lhasa government official, Tsewang Rigdzin Namgyal. He asked for elaboration, so I added additional stanzas to the visualization portion of the practice to make it easier to follow. During that time period, I completed the whole body of these dakini teachings.”

According to Lama Dechen Yeshe Wangmo[7]:

Over the years, in Kongpo, Lhasa, and Kalimpong, Dudjom Rinpoche wrote more Khandro Tuktik texts such as the concise sadhanas of Kurukulle, Senge Dongma, and Nakmo Tröma, and an extensive text on the phases of creation and completion meditation in connection to the four empowerments. Several individuals, unknown to us today, requested Dudjom Rinpoche to write many supplementary texts which expand on the Root Verses. Tsewang Rigzin Nampar Gyalwayday, a Lhasa official, became the custodian (Wyl. ter dag) of the Khandro Tuktik, that is to say, he was responsible for spreading the treasure and he sponsored many texts.

Today, the Khandro Tuktik is published in Tibetan as volume 16 of The Collected Works of Dudjom Rinpoche. Two texts are authored by Chatral Rinpoche and the entire treasure consists of 550 pages[8].