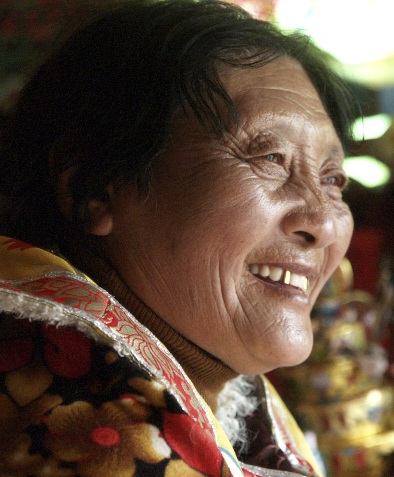 Khandroma Kunzang Wangmo (- 2009) was the daughter of Patrul Namkha Jikmé (1888-1960), himself a son of Dudjom Lingpa and the fourth incarnation of Patrul Rinpoche. She was a remarkable contemporary yogini from Dzachukha in Eastern Tibet.

As a young child, Khandroma was recognized for her special qualities and given an education. Her father, a renowned Dzogchen master, predicted that she would be the one to continue his lineage.

Khandroma Kunzang Wangmo mainly studied with her father, Patrul Namkha Jikmé, himself a son of Dudjom Lingpa. With him, she received all the transmissions of the Dudjom Tersar and Longchen Nyingthig lineages.

Khandroma was a prominent leader and guide to her entire community. People came to her, often from very long distances, to ask for her help and guidance. Whether she offered a prayer for their deceased relatives or clothing for their backs, she always provided what people needed. Khandroma was very active in preserving her religious lineage. She oversaw, renovated, and expanded her father’s two monasteries at Arikza and Dzagya. Dzagyal Monastery was once a famous place of study and practice founded by Patrul Rinpoche himself. Khandroma considered that her life’s work to be renovating the buildings, including the main temple. However, her main focus was to add to the monastery a monastic college, or shedra, where monks could pursue higher education.

Khandroma was considered the matriarch, not just of her own family, but of the entire region. Known as just Khandroma or simply ‘Ama’ meaning ‘mother’, she was both a laywoman and lineage holder.

Although she had no children of her own, she adopted many children and disciples in need, both Tibetan and Chinese alike. In this way, she helped bridge the gap between these two cultures, which have historically been so divided. Her unbiased and boundless compassion were perhaps her most exceptional qualities.