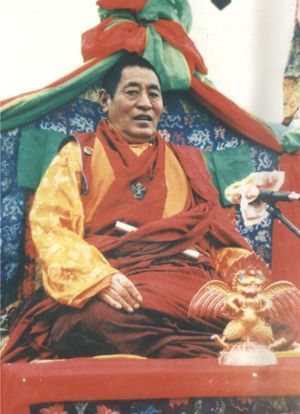 Khenpo Jikme Phuntsok' (Wyl. jigs med phun tshogs rin po che) (1933-2004) was an incarnation of Tertön Sogyal Lerab Lingpa and an emanation of Mipham Rinpoche. He revealed a number of termas in Tibet, Bhutan, China, Nepal and India. He played an extremely important role in the revival of Buddhism in Tibet after the Cultural Revolution. In the later part of his life more than 10,000 students gathered around him at Larung Gar in Sertar in Eastern Tibet.