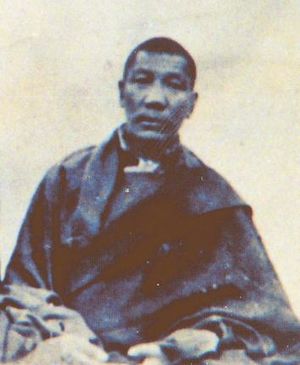 Khenpo Shenga (Wyl. mkhan po gzhan dga’) aka Shenpen Chökyi Nangwa (gzhan phan chos kyi snang ba) (1871-1927) — an important figure in the Rimé movement who revitalized study in much of Eastern Tibet by founding shedras and by revising the scholastic curriculum with an emphasis on the classical treatises of India.

Aside from his major annotation commentaries on the thirteen classical treatises and also one on the root text of the Guhyagarbha Tantra, his collected writings include A Mirror Clearly Reflecting What Must Be Known: The Six Topics of the Learned, as well as various praises and songs of realization. A previously unknown commentary of his on Patrul Rinpoche’s Advice that is Virtuous in the Beginning, Middle and End was discovered recently in Tibet and published in Nepal.