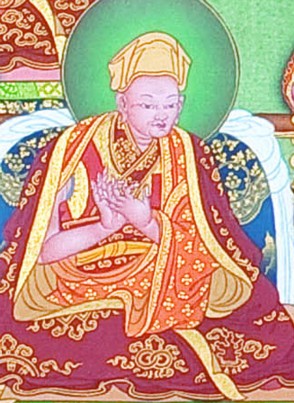 In 1604, in Drepung Monastery, he gave many special instructions to the Fourth Dalai Lama, Yönten Gyatso in both Sutra and Tantra and gave him full ordination.

With the passing away of the Fourth Dalai Lama in 1616 he undertook the search for his reincarnation and declared the boy born in Chonggyé as the true incarnation, he officiated at his hair-cutting ceremony naming him Lobsang Gyatso. He also gave him novice ordination in 1625 and then full ordination in 1638 and taught him extensively from the Sutras and Tantras.

In 1620 he mediated in the war between the ruler of Tsang and the Mongols. He acted as a mediator between the Gelugpas and Karma Kagyüpas who had become embroiled in bloody political struggles. In this way he contributed greatly to peace in Tibet.

He was also Abbot of Shalu Monastery for twenty years and composed five volumes of commentaries on the sutras and tantras and amongst the Gelugpas he was regarded as an equal to Tsongkhapa himself.

He continued to be Abbot of Tashilhunpo until he passed away, aged 92, in 1662.