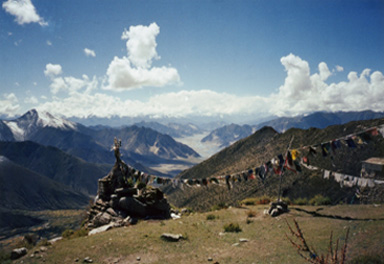 Longchenpa (Wyl. klong chen pa), also known as Longchen Rabjam, ‘Infinite, Vast Expanse of Space’, or Drimé Özer (1308-1364), was one of the most brilliant teachers of the Nyingma lineage. He systematized the Nyingma teachings in his ‘Seven Treasures’ and wrote extensively on Dzogchen. He transmitted the Longchen Nyingtik cycle of teachings and practice to Jikmé Lingpa, and it has since become one of the most widely practised of traditions.

The figure of Longchen Rabjam stands out as one of the greatest Dzogchen masters in the Nyingma tradition, and amongst the most brilliant and original writers in Tibetan Buddhist literature. He was the author of over 200 works, of which only about twenty-five survive, and amongst which the Seven Treasuries (Dzö Dun) and Three Trilogies are most well-known. It was he who brought together into a cohesive system the teachings of Vima Nyingtik and Khandro Nyingtik, on which he wrote the ‘Three Yangtik’ or Inner Essencess.