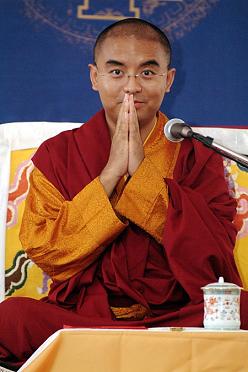 Mingyur Rinpoche (Tib. མི་འགྱུར་རིན་པོ་ཆེ་, Wyl. mi 'gyur rin po che) was born in Nubri, Nepal in 1975. At the age of three, he was recognized by Kyabjé Dilgo Khyentse Rinpoche as the incarnation of both Yongey Mingyur Rinpoche and Kangyur Rinpoche, who were great Tibetan yogis and tertöns. From an early age, he showed great aptitude in his studies, and mastered all the five main branches of learning in the Tibetan Buddhist tradition. In addition to his studies, Mingyur Rinpoche has completed several long periods of personal retreat, and has continuously received teachings and instructions from many great masters, including his father, the renowned Dzogchen master Tulku Urgyen Rinpoche, Tai Situ Rinpoche, Saljay Rinpoche and Nyoshul Khen Rinpoche. He has travelled several times to the West, including visits to France and America, giving teachings and retreats. Rinpoche teaches with a remarkable depth and scholarship.

In early June, 2011, Mingyur Rinpoche left his monastery in Bodhgaya, India to begin a period of extended solitary retreat. He returned in November of 2015 and is currently teaching his monastic and western students living around the world.