Difference between revisions of "Namgyal Drolma" 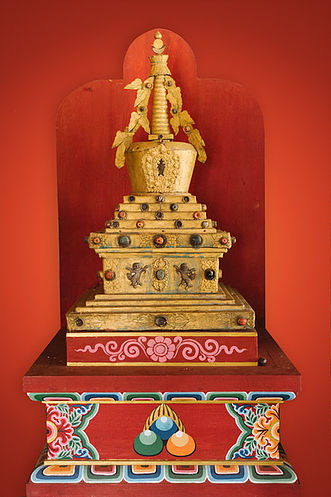 In approximatively 18th-19th century, Namgyal Drolma’s family had emigrated from eastern Bhutan to Pemakö. Her family members were direct descendants of the fifteen-century tertön Ratna Lingpa, whose termas are widely practiced in all parts of Pemakö, as well as in many major monasteries following the Nyingma tradition.

Namgyal Drolma recalled a prophetic dream she had, saying, “In my dream I found two conches with the most beautiful color and shape, perfect in every way, only one was slightly bigger than the other. As I tried to blow each conch, the sound of the larger went in all directions, yet as I blew the second one, the sound did not go very far.” Clearly, the first conch represented Dudjom Rinpoche, whose enlightened activities have reached all directions, and the second one symbolized Tulku Palden, who did not live long enough to complete his Dharma activities.”[3]. According to Tulku Orgyen Phuntsok, ‘Namgyal Drolma was well-known as a Dakini in human form’.[4]

After the passing of her first husband Tulku Jampal Norbu, Namgyal Drolma married Lama Könrab, a direct student of Dudjom Lingpa who had come from Golok to Pemakö in search of the incarnation of his teacher. Lama Könrab was the main master of the dharma center Khorlo Dratsang. Namgyal Drolma and Lama Könrab's house was located just behind the Khorlo Dratsang dharma center. Khorlo Dratsang was not a monastery, but a Dharma center where people would come just to practice and did not have to permanently stay at this place. Pemakö people love that way of practicing. [5] Lama Könrab was the father of Chonyi Rinpoche, a main student of Dudjom Rinpoche, who married Semo Dechen Yudron.

When I was six or seven years old, around 1958, I went with my mother to Pemakö. There, I met Namgyal Drolma. She was short, like Dudjom Rinpoche’s size, with white and long hair. At that time, she must have been approximatively sixty years old. Her hair was done nicely like the Pemakö women. Namgyal Drolma was a wonderful woman, so nice, and so beautiful.
Namgyal Drolma owned many lands, larege enough to feed many people. The fields were so big that many people from many different areas and villages of Pemakö, like Tirkung and Géling villages, had to go there to help work on the fields. My mother helped Namgyal Drolma work in the farm. But because I was only six or seven years old, I did not have to work in the fields.
When the fields were harvested, and in the New Year, we were invited for feasts. For the feasts, I always joined, with my mother. I went to Namgyal Drolma and Lama Könrab’s house, which was located just behind Khorlo Dratsang. 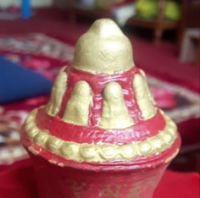 Namgyal Drolma passed away in Upper Pemakö, before the political turmoil of the 1960s. During Namgyal Drolma’s cremation, many people saw an image of Vajravarahi in the flame.[7]

According to Tulku Orgyen Phuntsok,[9]

Tulku Orgyen Phuntsok recounts how proud Pemakö people were and are nowadays of having those really cherished Dudjom Tersar relics, the stupas of Namgyal Drolma and of Gyurmé Ngédön Wangpo.[10] 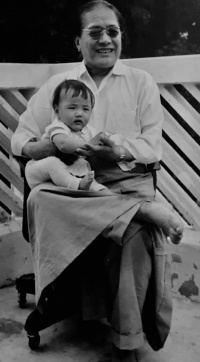 According to Shenphen Dawa Rinpoche, "From the union of my sister Chimey Wangmo and Dasho Urgyen Wangchuk, Semo Lhanzey Wangmo was born. Even before she was born, Dudjom Rinpoche recognized one of his own grand-daughters, Semo Wangmo Lhanzey, as an incarnation of his mother Namgyal Drolma."[11]