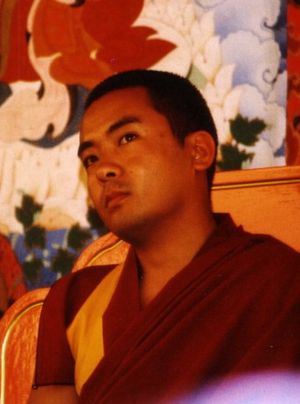 Neten Chokling Rinpoche (Wyl. gnas brtan mchog gling rin po che), aka Rigdzin Gyurme Dorje (b. 10 August 1973) — the Fourth Neten Chokling was recognized by both H.H. Karmapa and Dilgo Khyentse Rinpoche as the reincarnation of Neten Chokling Pema Gyurme. He was born on the tenth day of the eighth month to a poor family in Wandipodzong, central Bhutan. Karmapa named him Gyurme Dorje. At the age of seven, he was taken to his monastery in Bir, and en­throned by Dilgo Khyentse Rinpoche in Clement Town at the monastery Ngedön Gatsal Ling. Before arriving in his home monastery he was enthroned in Rumtek by H.H. Karmapa. He has received the transmissions of the Kangyur, Nyingma Gyübum, Nyingma Kama, Rinchen Terdzö, and Chokling Tersar as well as many other teachings from Dilgo Khyentse Rinpoche. He is also the father of Tulku Urgyen Yangsi Rinpoche. 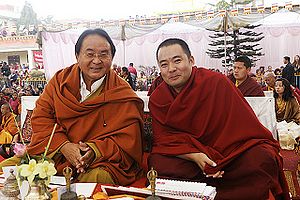