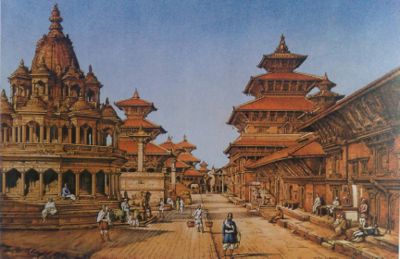 The Mahabodhi temple, also known as the Thousand Buddhas of Patan (wyl. Ye-rang sangs-rgyas stong sku) is a small replica of Mahabodhi temple in Bodhgaya, made of bricks and stones. It was built in the 17th century (1601) by a member of the Shakya caste, the caste of Buddhist priests in the Newari system, who, in order to increase his power and wealth, went to the Bodhgaya, and after he returned from his pilgrimage built a replica of the main temple where he enshrined a stone image of Buddha that he brought from Bodhgaya. It is said that the temple, which took 34 years to be completed, contains 9,999 images of the Bhagavan.