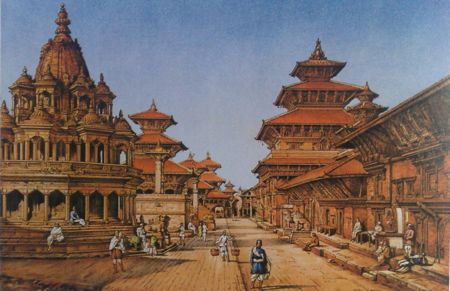 Patan, Lalitpur, or "Yala" as it is known by the Newar, its main inhabitants, (Tib. Yerang, Wyl. ye rang) is considered to be the oldest of the three cities of Kathmandu Valley. It lies now in the South of the Kathmandu agglomeration, within the ring road. Its official name is Lalitpur Sub-Metropolitan City, and is one of the largest towns in Nepal. The heart of this ancient city, Patan Durbar Square, has been listed by UNESCO as one of seven Monument Zones that make up the Kathmandu Valley World Heritage Site. Of the three main cities of Kathmandu valley which are historically Newar, Patan is mostly Buddhist, containing more than 160 Nepali Buddhist monasteries known as baha, Bhaktapur is primarily Hindu, whereas Kathmandu is mixed. Patan is the main centre of metalcraft for the region, where numerous small workshops produce most of the statues sold in the other parts of the Kathmandu valley, such as around the Boudhanath stupa.

In the centre of Patan, at a place called Nag Bahal, sits the Golden Temple (Skt. Hiranyavarna Mahavihara; Wyl. ye rang thub pa'i lha khang) the Vihara of Shakyamuni Buddha. It enshrines an image of Buddha known as the the 'Patan Shakyamuni' (Wyl. ye rang shakya thub pa), which is considered extremely sacred.

The Mahabodhi temple, also known as the Thousand Buddhas of Patan (wyl. Ye-rang sangs-rgyas stong sku) is a small replica of Mahabodhi temple in Bodhgaya, made of bricks and stones. It was built in the 17th century (1601) by Abayaraja Shakya, a member of the Shakya caste, the caste of Buddhist priests in the Newari system, who, in order to increase his power and wealth, went to the Bodhgaya, and after he returned from his pilgrimage built a replica of the main temple where he enshrined a stone image of Buddha that he brought from Bodhgaya. It is said that the temple, which took 34 years to be completed, is said to contain 9,999 images of the Bhagavan.

The Uku Bahal is one of the most famous Buddhist monasteries in Patan. It seems it was build by king Shivadeva around 1650.

This is the most famous temple in Patan and one of the most popular in the religious life of the community. The main deity in the shrine is the form of Avalokiteshvara known as Padmapani, popularly called Machhendra in Kathmandu valley. The deity was originally the Bundyo of Bungamati, and each year it spends three months in that town, probably an arrangement from the kings when the temple was established circa 1670.

Across the road is the Min Nath, a small temple (or nath) enshrining a Buddhist deity which is brought out during the great Machhendra festival and follows behind the big charriot.