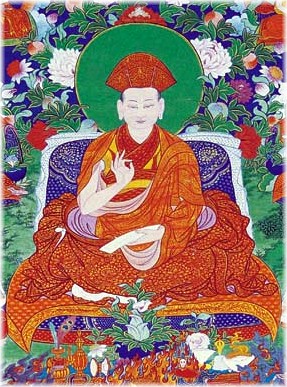 Künkhyen Pema Karpo (Wyl. pad ma dkar po) aka Ngawang Norbu (ngag dbang nor bu) (1527-1592) was the fourth Gyalwang Drukpa. He was a great scholar and accomplished master of the Drukpa Kagyü school. Gene Smith writes, "The breadth of his scholarship and learning invites comparison with the Fifth Dalai Lama. It was [he] who systematized the teaching of the 'Brug pa sect." [1]

He composed 24 volumes of writings including a history of Buddhism and commentary on the Bodhicharyavatara.

There were two immediate incarnations of Künkhyen Pema Karpo: Paksam Wangpo who stayed in Tibet and Shabdrung Ngawang Namgyal (1594-1651) who went to Bhutan in 1616, where he introduced the Drukpa Kagyü teachings.