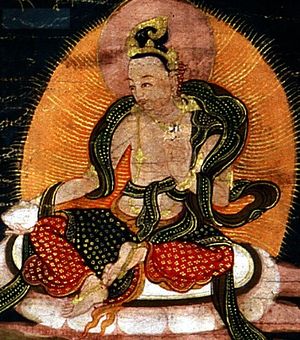 Princess Pema Sal was King Trisong Detsen's daughter. After she died at the age of eight, Padmasambhava drew a red syllable NRI on her heart, summoned her consciousness, restored her to life and gave her the transmission of the Nyingtik teachings, soon after which she passed away. Yeshe Tsogyal concealed the teachings as terma, and centuries later, Pema Sel's incarnation, the master Pema Ledreltsal, revealed the Khandro Nyingtik cycle. His next rebirth was as the omniscient Longchen Rabjam.