Difference between revisions of "Praises to the Twenty-One Taras" 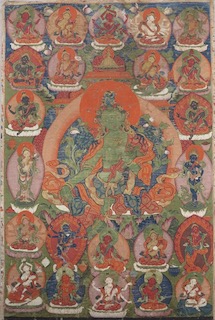 Twenty-one Taras from the Suryagupta tradition

The first twenty-one verses of the Praise conjure Tara by interchangeably drawing upon the three epithets that also form the core of her root mantra (oṃ tāre tuttāre ture svāhā). These three are Tara (Deliverer), Tuttara (Saviour) and Tura (Swift One). The twenty-one verses are a homage to Tara, and a poetic description of her physical features, postures, qualities, abilities, mantras and hand gestures. The remaining six verses describe how and when the Praise should be recited, and the benefits of its recitation. The number of twenty-seven verses, is of great significance, since it is part of the sacred poetry of this text. The Praise thus consists of the sacred and auspicious number of 108 sections (in Sanskrit, twenty-seven times four sections, and in Tibetan twenty-seven times four lines).

While the Praise itself does not name or identify specific forms of Tara, the iconographic traditions all identify one particular form of Tara with each of the first twenty-one verses. Each form is then associated with one enlightened activity and, based on this activity, each Tara is given a specific name. However, the traditions differ in their identification of which verse describes which form and activity of Tara.

Tibetan scholars of all four schools of Tibetan Buddhism have written commentaries on the Praise, some of which may be traced back to oral lineages from India. Many of them are word-by-word commentaries.

For Tibetan Buddhists over the world, the Praise probably counts as the most popular of all prayers to Tara, and it is chanted by monastics and lay practitioners on a daily basis. When Tibetan Buddhists recite the Praise, it has become the custom to take a shortcut and recite just the first twenty-one verses of homage. Tibetan Buddhists also tend to include the translator’s homage in their recitation, as composed by the Tibetan translator(s) or subsequent editor(s), together with an additional mantra syllable oṃ.