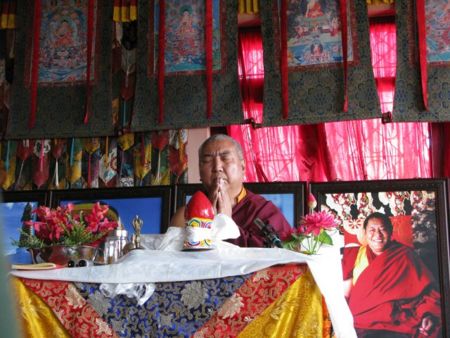 In 2007, the shedra focused on Shantideva's classic text, the Bodhicharyavatara. MP3 audio files of these teachings are available here.

The Shedra 2007-2008 studied Mipham Rinpoche’s commentary The Adornment of the Middle Way, Shantarakshita’s Madhyamakalankara with Commentary By Jamgön Mipham.

The Rigpa Shedra began in Lerab Ling in the summer of 2001. Dzigar Kongtrul Rinpoche and Ringu Tulku Rinpoche both taught on the ninth chapter of Shantideva’s Bodhicharyavatara.

For the third year, which took place in Dzogchen Beara in Ireland, Dzigar Kongtrul Rinpoche taught on Maitreya’s Abhisamayalankara and Alan Wallace presented the views of the four main philosophical schools of Buddhism. Students also reviewed Ringu Tulku Rinpoche’s teachings on the whole of the Bodhicharyavatara.

For the fourth year, Dzogchen Rinpoche taught on the Abhisamayalankara and introduced us to buddhist debate, and Ringu Tulku Rinpoche began his teachings on Shantarakshita’s Madhyamakalankara using the commentary of Mipham Rinpoche.

In the fifth year, the shedra was once again at home in Lerab Ling. We had the pleasure of welcoming back Ringu Tulku Rinpoche, the Rigpa Shedra’s most regular teacher, for the second and final year of his brilliant commentary upon Mipham Rinpoche’s celebrated exposition of the Ornament of the Middle Way by Khenpo Shantarakshita. Each day, Rinpoche delivered a brilliant and seemingly effortless summary of as many as thirty or forty pages of text, masterfully encapsulating the essential meaning of the treatise.