Difference between revisions of "Shya Lhakhang" 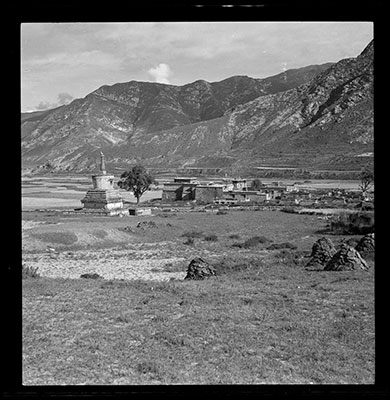 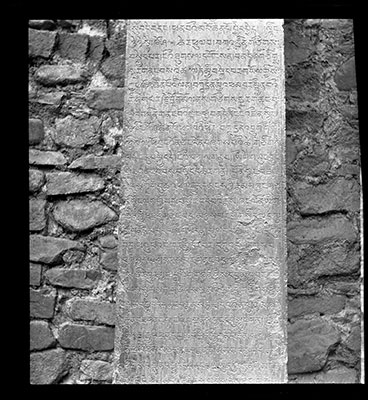 Inscription on the West side

Shya Lhakhang or Temple of the Hat (Tib. ཞྭ་ལྷ་ཁང་, Wyl. zhwa lha khang) — a temple founded by Nyang Tingdzin Zangpo. It is also called Uru (དབུ་རུ་, dbu ru) Shyayi Lhakhang; Uru being the place where it is located, which is in Drigung, in Ü-Tsang.

A pillar next to the temple records the privileges granted to Nyang Tingdzin Zangpo by King Senalek Jingyön. The emperor looked with great kindness upon Tingdzin Zangpo, since he had been his tutor when growing up. Important dzogchen treasures have been hidden there, to be revealed later. In time the monastery changed religious affiliation, and it is now connected with Sera Monastery.

In his Dzogchen History, Nyoshul Khen Rinpoche relates the following:

The guardian Vajrasadhu made hail fall in a region in eastern Tibet and obtained a harvest of five hundred camel loads of barley as a result. Nyang threw a nine-pronged golden vajra into the sky, inciting Vajrasadhu to recall his former samaya commitments. The guardian then offered the grain to Nyang, who accepted it to finance the temple of Shya Lhakhang and enjoined Vajrasadhu to be its protective deity. It was within this temple, thus erected with nonhuman sources of material and wealth, that Nyang placed the explanatory tantras associated with the lineage of the Nyingtik teachings, concealing three cycles within three layers of crypts. A clay urn filled with scrolls, the manuscripts of the oral lineage, was concealed above the lintel of the gatehouse. Nyang concealed The Golden Heart Essence: The Intensely Illuminating Sun, a text from the most secret unsurpassable cycle, in the three-tiered capital of the central pillar. For the benefit of future generations of fortunate people, he applied seals to these, rendering them invisible.[1]