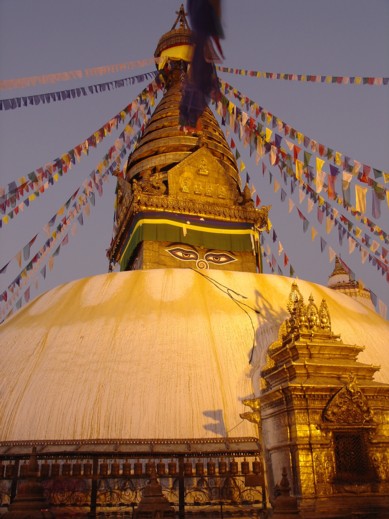 Swayambhunath Stupa (Tib. Phakpa Shingkün, wyl. 'phags pa shing kun) - The site of one of the most sacred stupas in Nepal, located on top of a hill in the west of the Kathmandu Valley, Swayambhunath is known to Tibetans as Pakpa Shingkun.

Swayambhu means self arisen. This particular stupa complex was built, according to the different traditions, around a small crystal stupa that was self-arisen on top of this hill or a lotus flower naturally radiating light. The Swayambhunath Hill which according to Trulshik Rinpoche, has been blessed by thousands of Buddhas and will be blessed by all the Buddhas of this kalpa, and is therefore often considered as the most sacred spot in the whole of the Kathmandu Valley. And according to the Seventh Dalai Lama, this very stupa is the source of all the happiness in the world.

According to the traditional accounts the stupa was in the middle of a vast lake when Mañjushri and two friends saw it on their way from Wu Tai Chan in China to Nepal. If found the stupa so incredible that he wondered how to make it possible for pilgrim to be able to walk to the stupa for their devotional practices. So he cut the mountain with his sword and the water poured out for four days and four nights. The Madara Lake (Wyl. mtsho ral gri) in Chobar in the South-East of Kathmandu on the way to Pharping.

There is a prophecy that says when two fangs come to eat the stupa at Swayambhunath, it will mark the beginning of the decline of Buddhism in Nepal. So the fourth Khamtrul Rinpoche (Khamtrul Chökyi Nyima 1730-1780) said in his Pilgrim Guide to the Kathmandu Valley (Wyl. kham sprul gnas yig) that they correspond to the two Hindu temples, which are on either side of the main staircase and look like fangs. They were built a few hundred years ago. A couple of years ago the Northern one collapsed, and Buddhist were happy, hoping they wouldn’t rebuild it. But the government decided to rebuilt it. The stupa is surrounded by a number of temples.

According to the Pema Kathang, Guru Rinpoche hid many termas in Swayambunath. This is also the place where Marpa Lotsawa first heard of the name of Naropa and spend three years “to get used to the heat”, according to the instruction of his Newari master. It is also said that Thangtong Gyalpo traveled to the stupa in one instant with his magical power. Five days later a rich person made large offerings to him, which he used to whitewash the stupa.

At the head of the stairs is a Vajradhatu mandala with an impressive gilt vajra borne on top. It was placed by the Nepali king Pratapmalla also responsible for the two fang-like shrines.

When the Buddha met her she was eating her children. The Buddha asked to stop doing this, but she replied, “If I don’t eat my own children, what else am I going to eat?” The Buddha then said that all his followers will now leave her a portion at the end of their meal.

Behind the Swayambhunath stupa itself is an image of a standing Shakyamuni Buddha made of black stone. The Fourth Khamtrul Rinpoche, when he came here in the 1700s who said that of all the power spots in the Kathmandu valley, this was one of the most special.

The great master Vasubandhu, came here and spend quite some time in Swayambhu. One he was sitting at the particular place where his stupa is now, he looked over the fields down the hill and he saw a monk who had taken off his robe and wrapped it around his head to keep the sun off his head and was plowing the field. And Vasubandhu said, "Well, if this is the state of the Dharma, then there’s no point in me hanging around," and he recited the dharani or the long mantra of Ushnishavijaya backwards, his head split and he passed away. His body was placed inside this reliquary stupa.