Difference between revisions of "Tertön Sogyal" 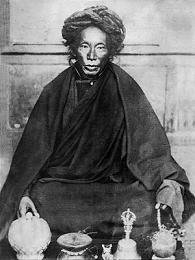 In his previous incarnations he had appeared as numerous great bodhisattvas and vidyadharas, including the bodhisattva Vajragarbha who compiled the Dzogchen teachings given by the Buddha Samantabhadra in Akanishtha. Later he appeared as Buddha Shakyamuni’s aunt and stepmother, Prajapati Gotami, the founder of the order of nuns, and in Tibet he appeared as Nanam Dorje Dudjom, Trophu Lotsawa and the great Rigdzin Gödemchen (1337-1408), founder of the Northern Treasures (Changter) tradition.

He was born in the year of the Fire Dragon of the fourteenth calendrical cycle (1856) in Upper Nyarong in Kham. His father was Dargye from the Shyipa family and his mother was Orgyen Drolma.

From the age of 13 to 18, he stayed in retreat. During this time he saw many things directly through the power of his clairvoyance. Whilst in retreat, he deciphered a terma in the coded script of Yeshe Tsogyal. After the retreat, he travelled to Kathok with Lama Sonam Thayé and others and received empowerments from Jikmé Yönten Gönpo (aka Tenpé Gyaltsen) and other transmissions from Kathok Getsé Tulku (the reincarnation of Gyurme Tsewang Chokdrup). Later he went to Dzahka Sangak Rabten Ling and received instructions on the preliminaries and main practice of Longsal Nyingpo from Choktrul Rinpoche Kunzang Namgyal. He then went to receive instruction on the Longchen Nyingtik from Patrul Rinpoche’s disciple, Nyoshul Lungtok Tenpé Nyima. Later, he received detailed teachings on the Guhyagarbha Tantra from Mipham Rinpoche for a period of several months. 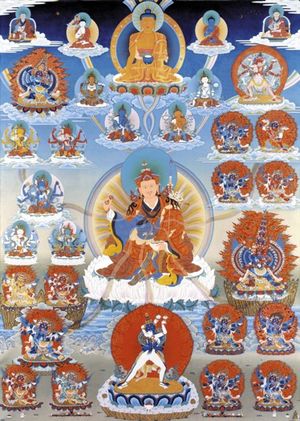 In the Male Earth Mouse year (1888), he met the Thirteenth Dalai Lama for the first time in Lhasa. They went on to meet several more times, and the Dalai Lama became one of his main students and Dharma heirs. In 1895 he revealed the terma of Yang Nying Pudri together with Jamgön Kongtrul. In time, this Vajrakilaya practice became one of the regular practices of the Dalai Lama’s own monastery, Namgyal, and His Holiness composed a manual for practising it as a drupchen.

He returned to Lhasa several more times in the following years, and travelled widely, revealing more termas including Tendrel Nyesel, Dispelling Flaws in Interdependence, which became one of the most widely practised among his revelations.

In the year of the Wood Mouse (1924) he offered the remainder of his termas to Dodrupchen Jikmé Tenpé Nyima. At the end of their meeting the two masters exchanged white scarves, something they had never done before, and then each said, “I will see you again in the pure land.”

During the Wood Ox (1925), he re-concealed all those termas which remained incomplete and made aspirations to meet with them again in future. Finally, the great tertön displayed the signs of passing into nirvana on the tenth day of the first month of the year of the Fire Tiger (1926).

He was one of the most prolific tertöns in history, his collected terma revelations filling almost twenty volumes. Several of his original written works, most notably his commentary on the Chetsun Nyingtik, have also survived. 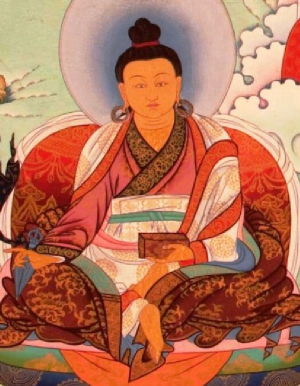 Tertön Sogyal was a prolific tertön, whose collected revelations fill twenty volumes. Some of his more important revelations were:

His lineage also continued with his sons, including Rigdzin Namgyal and Chöpel Gyatso, and passed on to his grandson, Tromgé Tulku Dechen Dorje, who lives at the Tromgé encampment in eastern Tibet.

He had several incarnations as indicated in the texts of his terma discoveries and in predictions made to his disciples, including Sogyal Rinpoche, who was recognized by Jamyang Khyentse Chökyi Lodrö, and the late Khenpo Jikmé Phuntsok (1933-2004), who received all the transmissions of Tertön Sogyal from Lama Gendun Dargye, a direct disciple of the tertön.

Teachings Given to the Rigpa Sangha About Tertön Sogyal