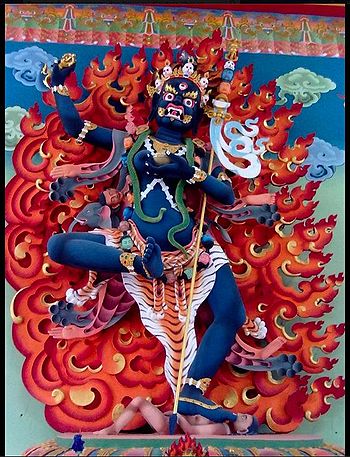 Tröma Nakmo (Skt. Krodhakālī; Tib. ཁྲོས་མ་ནག་མོ་, Wyl. khros ma nag mo; Eng. 'The Black Wrathful Mother') — a feminine embodiment of wisdom. Tröma Nakmo is the innermost secret aspect of the khandro practice in the Dudjom Tersar lineage. The chö practice of Tröma Nakmo provides us with an extremely powerful means to cut through the dualistic clinging of mind, the root of suffering thus revealing our inherent wisdom nature.

The Origins of the Terma

Foreseeing the difficulties of future times, Guru Rinpoche in his compassion revealed a rare teaching of The Black Wrathful Dakini to his chief consort Yeshe Tsogyal, who later concealed this as a terma. This treasure was to be discovered at an appropriate time by one of the reincarnations of Padmasambhava’s twenty-five disciples, Khye'u Chung Lotsawa. Khye'u Chung Lotsawa reincarnated as Rigdzin Düddul Dorje, the great revitaliser of the Katok Monastery lineage, and then later as the meditation master and tertön Dudjom Lingpa (1835-1904).

Dudjom Lingpa received the direct transmissions of the Tröma Nakmo cycle through a series of visions of Machik Labdrön, Saraha, Padampa Sangye and others. He kept the practice secret for some time before teaching it.

In the Dudjom Tersar tradition, the practice of Tröma Nakmo contains the complete path of Vajrayana, from the ngöndro all the way through to the Dzogchen practices of Trekchö and Tögal. According to Chagdud Tulku Rinpoche, "The Tröma Nakmo based practice of Chö removes obstacles, both for our short-term happiness and those hindering our ultimate enlightenment. It carries extraordinary healing power and through its practice we can accumulate merit and wisdom in a vast and rapid way. Merely making a connection to Tröma Nakmo practice brings great benefit and blessings".

At least thirteen of Dudjom Lingpa's disciples attained rainbow body through the practice of Tröma Nakmo.