When his father Tsewang Paljor passed away in the spring of 1999, Sogyal Rinpoche requested Orgyen Tobgyal Rinpoche to write a tribute to his achievements and to his extraordinary life. Tsewang Paljor’s lifetime spanned the whole of the twentieth century, and his work for the Dharma and his master Jamyang Khyentse Chökyi Lodrö brought him in contact with the greatest Tibetan masters of the age.

A Tribute to a Remarkable Life 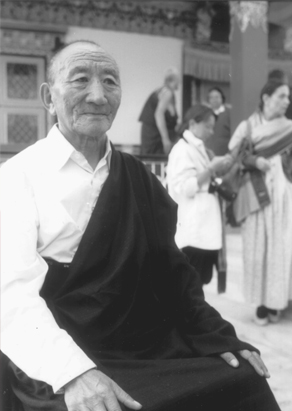 Tsewang Paljor outside the temple of the newly inaugurated Dzogchen Monastery in South India, January 1992

Tsewang Paljor, the greatly respected private secretary to the second Jamyang Khyentse of Dzongsar, Dorje Chang Chökyi Lodrö, and father of the seventh Dzogchen Rinpoche, passed away in Sikkim on the fifth of April this year, the Tibetan Earth Hare in the seventeenth calendrical cycle.

He was born in the Iron Dog year of the fifteenth calendrical cycle in a place called Sangen, in the Derge district of East Tibet. His mother was from the family of Serpa Tertön, and a descendant of the great tertön Düddul Dorje. After learning to read and write at an early age, and training in astrology and poetry, he entered Dzongsar Monastery in his eighteenth year, as instructed by his uncle, Dzongsar Jamyang Khyentse himself. Before too long, he became renowned throughout the Kham region as the ‘secretary-lama Tsewang Paljor’, on account of his outstanding intelligence and capabilities.

Throughout his life, Tsewang Paljor worked on numerous projects to ensure the survival and expansion of the precious teachings, related to study, meditation practice and creative activities, such as the organising of empowerments, transmissions and teachings. These projects included the founding of the great Kham-jé shedra at Jamyang Khyentse Chökyi Lodrö’s own seat of Dzongsar, which produced so many of East Tibet’s great scholars, as well as the retreat centre of Karmo Taktsang. There was also the renovation of the Dragang Nyengyü retreat centre at the great monastery of Derge and the carving of a new set of woodblock-prints for the fifteen-volume collected works of the previous Jamyang Khyentse. The Tsé Lhakhang temple was built at Dzongsar and its images installed, and a statue of the future Buddha Maitreya was erected, unequalled in all of Kham.

In all these activities, he offered his services with the utmost devotion of his body, speech and mind. Although his work involved dealings in fields such as trade and agriculture, it definitely brought tremendous benefit. In particular, during the organization of empowerments, transmissions and teachings when Dzongsar played host to many hundreds of masters from all traditions, he ensured that all of them were taken care of properly. Through his efforts, everything was done to bring about the most favourable of circumstances, and there was never even the slightest hint of dissatisfaction.

From 1954 onwards, he frequently journeyed to the Trehor region, which was home to the Lakar family, great benefactors of the teachings, whom many masters likened to Anathapindaka (the greatest patron of Shakyamuni Buddha). He took the elder daughter of the family, Tsering Wangmo (known as 'Tselu'), as his spiritual wife and adopted the dress of a layman. In 1957, he travelled with Khyentse Rinpoche and the Lakar family to Lhasa, passing through the main places of pilgrimage in Kham on the way. Together they made vast offerings at the three principal centres of Dharma in Central Tibet—Lhasa, Samye and Tradruk. In all the sacred sites they visited, the teacher and his party were greeted by gatherings of vajra assemblies. They presented a great offering to His Holiness the Dalai Lama in the Norling Kalzang Palace, and he granted them a private audience. Then, having made their way slowly through Tsang, visiting and making offerings at all the holy sites en route, they arrived in Gangtok, the capital of Sikkim. From there, they undertook a pilgrimage around the most important sites of India and Nepal, all the time combining extensive offerings with vast prayers of aspiration.

In 1959, the Jamyang Khyentse displayed the signs of dissolving into the dharmadhatu, in the palace temple in Gangtok. Tsewang Paljor was charged with overseeing the offerings and the gong dzok—fulfilment of his intentions. He saw that everything necessary was accomplished, especially the cremation and the construction of a single storey bodhi stupa at Tashiding, within the sacred land of Sikkim. There was also a similar bodhi stupa of pure gold placed within Jamyang Khyentse’s former living quarters at Sikkim’s palace temple, and a small gold reliquary stupa made in order to ensure his return one day to Kham. All these stupas were fashioned from the finest quality materials, such as pure gold, and ornamented with precious and semi-precious stones. They were easily financed using the wealth of the Khyentse Labrang and the Lakar family’s own private resources.

Following this, he remained for several years, doing his own practice in a small house which he had built in a place called Lü Sharmar, above Gangtok. He and his spiritual wife (sang-yum) Lakar Tselu, had four children. The youngest one, through the strength of a very deep spiritual and family connection, was born as the seventh in the line of Dzogchen Rinpoches.

When the incarnation of the former Khyentse Dorje Chang was born, as prophesied by His Holiness Sakya Trizin, as the son of Thinley Norbu and the grandson of Kyabjé Dudjom Rinpoche, Tsewang Paljor disregarded numerous hardships and organised an elaborate enthronement at the palace temple. This occasion signified the completion of all his tireless acts of service and he resigned his post as secretary-treasurer of Dzongsar Labrang. Before a gathering which included the consort of the previous Jamyang Khyentse, the new secretary Tashi Namgyal and several officials from Derge, he made a record of all the images (of body, speech and mind), offerings and riches in the possession of the labrang and formally handed over his responsibilities.

Then, in turn, the true incarnation of Dzogchen Rinpoche was also enthroned at Sikkim’s palace temple as a sovereign and protector of the Ngagyur Nyingma teachings, in accordance with the prophecy of Kyabjé Dodrup Rinpoche. While in Dharamsala for the hair-cutting ceremony in the presence of His Holiness the Dalai Lama, the young Dzogchen Tulku was advised to enter the Dharamsala School of Dialectics to study buddhist philosophy. 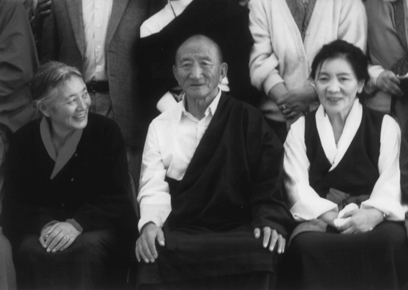 At Dzogchen Monastery in South India with Khandro Tsering Chödrön and his wife, Tsering Wangmo.

As he did so, his father set about reconstructing the monastic seat of Rudam Dzogchen in South India, near the town of Kollegal. Through great effort, it was completed in a very short time and inaugurated by His Holiness the Dalai Lama on 10th January, 1992. On this occasion, His Holiness taught on the Gyachen Nyer Nga, the twenty-five teachings containing the secret visions of the Great Fifth Dalai Lama. From that point on, study and practice, the sangha and so on, have all increased like the waxing moon. This, I believe, is mainly due to Tsewang Paljor’s enlightened vision and the aspiration prayers and kindness of his wife.

He travelled in the West, to Europe, America and elsewhere, and although he did not teach directly, he planted the seed of liberation in the minds of many devoted students.

Towards the end of his life, he returned for just four years to his former residence in Gangtok. He explained that he preferred to stay in a place of even temperature, near the stupa containing the relics of the former Jamyang Khyentse. Here, he was able to remain quietly doing his practice without interruption. He performed tsok together with his wife and Khandro Tsering Chödrön, the consort of Jamyang Khyentse, on the tenth and twenty-fifth days of the Tibetan month and on full and new moon days. In this way he devoted his time to practice and did not indulge in talk about worldly matters, but restricted his speech to recounting episodes from the lives of his teachers, their prophecies and so on.

Having celebrated the Tibetan New Year of the Earth Hare in such a way, at the age of ninety, he confided to those around him that, as he was now an old man, he had decided not to remain much longer. He had met Jamyang Khyentse in a dream and he had told him if he came quickly he would be happy. All his spiritual and worldly tasks had been well completed. He was content, he said, without any trace of physical or mental suffering. He displayed the signs of an illness and his family requested a divination. When an elaborate ceremony was performed on his behalf, he said, “I don’t need any ceremonies performed. My life and my dharma are both complete.” The illness gradually disappeared and he remained for about ten days without any trace of it at all. Then, on the morning of the nineteenth day of the second Tibetan month, he showed signs of ill health and in the afternoon, surrounded by his wife and family, he displayed the signs of passing away. At Tsering Paljor's own request Khandro Tsering Chödrön was present. He showed no distress, but remained in meditative equipoise with his right hand outstretched. His consort reminded him of the instructions for the after-death state (bardo) and Kyabjé Dodrupchen Rinpoche was invited to give guidance for the bardo and perform an elaborate dedication and aspiration. After this, a few close friends came to visit, but when it was realised that he was remaining in thukdam, the equipoise of the great sphere of luminosity, just as it is taught in the Dzogchen tantras, they were asked to wait until the following Monday morning.

Then, at the proper time, as determined through astrology, the Nyingma master Yangthang Rinpoche summoned him to arise from the state of thukdam, and he manifested the signs of doing so. His remains were dressed in sambhogakaya ornaments and cremated in a ceremony led by Kyabjé Dzogchen Rinpoche, Sogyal Rinpoche and Yangthang Rinpoche. Fire offerings were performed by means of two great mandalas, a gathering of Dzogchen khenpos and tulkus with lamas and monks from the Nyingma tradition on one side and a gathering of khenpos and others from the Ngor tradition on the other.

Orgyen Tobgyal, maker of aspiration prayers to remain under the compassionate protection of the Jamgön Lama Khyentse Wangpo throughout all lifetimes, wrote down whatever memories came to mind, without the slightest fabrication.