Difference between revisions of "Vajrakilaya" 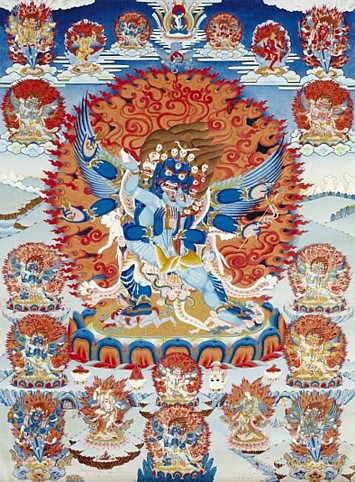 Vajrakilaya [Skt.] (Tib. dorje phurba; rdo rje phur pa) - The wrathful heruka Vajrakilaya, is the yidam deity who embodies the enlightened activity of all the buddhas and whose practice is famous for being the most powerful for removing obstacles, destroying the forces hostile to compassion and purifying the spiritual pollution so prevelant in this age. Vajrakilaya is one of the eight deities of Kagyé.

The Vajrakilaya Practices of the Rigpa Sangha

His Holiness the Dalai Lama:

On a daily basis, we can practise:

This was written by Dudjom Rinpoche as a short daily practice related to the terma cycle of Pudri Rekpung, The Razor That Destroys at a Touch.

The “Wisdom Mind Practice of ‘One Phurba’” is a terma discovered and deciphered by Tertön Sogyal in the monastery of Kathok Dorjé Den. It was written in the hand of the great Dzogchen master Vairotsana.

This short sadhana was composed by Jamyang Khyentse, at Sogyal Rinpoche’s request, while travelling on horseback from Kham (East Tibet) to Lhasa.