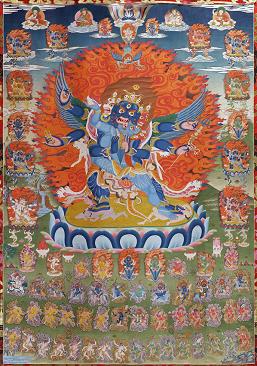 Yang Nying Pudri (Tib. yang snying spu gri), the Razor of the Innermost Essence, a cycle of Vajrakilaya practices revealed as a terma by Tertön Sogyal. It is the main yidam practice of the Rigpa sangha.

Tertön Sogyal’s biography, which was written by Tulku Tsullo, describes how the terma was revealed. In the autumn of 1895, Tertön Sogyal went with Jamgön Kongtrul to Tsadra Rinchen Drak, a sacred site closely linked with both Jamgön Kongtrul and Chokgyur Dechen Lingpa, and one of the twenty-five holy places of east Tibet, representing ‘the wisdom mind of enlightened qualities’. There, high up on the hillside, Tertön Sogyal approached ‘The Cave that Delights the Awesome Heruka’, where, his biography recounts:

In 1898 Tertön Sogyal traveled to Lhasa to meet the Dalai Lama. His first, momentous, meeting with the Dalai Lama had been ten years earlier, when, it was said, “their wisdom minds instantly merged as one.” Now, following a proclamation of the Nechung oracle, Tertön Sogyal offered the complete cycle of empowerment, transmission, and instruction of the Yang Nying Pudri to the Dalai Lama.

The Empowerment of Yang Nying Pudri

The empowerment has been given to the Rigpa Sangha on several occasions, including: