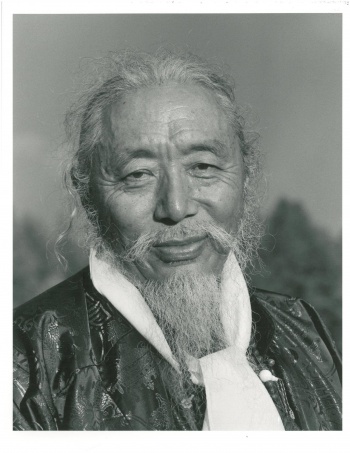 Bhakha Tulku Rinpoche aka Bhakha Tulku Pema Tenzing (b.1944) is the tenth incarnation in the Bhakha Tulku line from Bhakha Gompa (located in Powo region of south-eastern Tibet, at the entrance of Pemakö) and as such an incarnation of Pema Lingpa. He is a senior student of Garwang Sangye Dorje, Dudjom Rinpoche and of Chatral Rinpoche.

Bakha Tulku Rinpoche was born in 1944 in Tibet. At a young age, he was recognized by Jamyang Khyentse Chökyi Lodrö, the Sixteenth Karmapa and Dudjom Rinpoche [1] [2] recognized as the tenth incarnation in the Bhakha Tulku lineage [3].

Bhakha Gompa, Bhakha Tulku Rinpoche’s original monastery, is located in Powo, which was once an independent kingdom in southern Tibet. [4]

Bhakha Tulku Rinpoche explains the origins of the monastery’s location. [5]

In the seventh century, Tibet’s reigning emporer, Songtsen Gampo, had sent his most trusted minister to escort his Chinese bride from the Tang dynasty court. They fell in love, and the minister conspired to take the most circuitous route back to Lhasa as possible. As they entered the Powo valley, the princess gave birth to their stillborn child and consulted geomantic texts to determine the most auspicious burial site. Centuries later, Bhakha (Burial Ground) monastery was built at the site of the grave.

According to Ian Baker[6]

Bhakha Gompa is one of Powo’s principal monasteries. It sits on a promontory on the southern bank of the Po Tsang river, surrounded by glittering snow peaks and lush forests of hemlock and fir. To the easy, sandbars reach out into a wide and placid section of the Po Tsangpo. Where the river narrows again into fierce rapids, a wooden suspension bridge strung with colourful prayer flags connects the monastery to the northern bank and the road from Szechuan to Lhasa.

Recognized as other incarnations as well

Bhakha Tulku Rinpoche has also been recognized an incarnation of Tertön Dorje Lingpa, and an emanation of the eighth century scholar and translator Vairotsana.

At the age of nine, Bhakha Tulku Rinpoche began a three-year solitary meditation retreat in Powo under the tutelage of Garwang Sangye Dorje.

One month after completing his retreat, he embarked on a six-month pilgrimage through Pemakö. [7]. Medow once was the seat of a Nyingma monastery called Tambo Gompa. Bhakha Tulku Rinpoche spent three months there during his pilgrimage through Pemakö in 1956.The local Monpas urged him to remain and offered his family rice fields and mithun cattle. With a premonition of what would soon befall Tibetr, Bhakha Tulku Rinpoche pressed to stay in Pemakö, telling his mother, ‘If we leave this place we will never meet again.’ At his tutor’s insistence, they left Pemakö over the Doshung-La pass. Bhakha Tulku Rinpoche’s father met them on the far side of the pass with horses and mules for the onward journey to Lhassa. [8]

Pema Lingpa’s teachings had spread throughout Pemakö in the 1700’s, and as the principal emanation of this tertön, Bhakka Tulku Rinpoche was responsible for the many temples in Pemakö dedicated to the Pema Lingpa lineage.

Bhakha Tulku Rinpoche’s uncle had travelled through China with Jedrung Trakpa Gyaltsen—the reincarnation of Jedrung Trinlé Jampa Jungné— and witnessed the beginnings of a major cultural upheaval. Upon his return he urged his extended family members to resettle in the secluded valleys of lower Pemakö. Together with a tutor, two monk attendants, his mother, two younger brothers, and three other families and their servants, Bhakha Tulku crossed the Dashing-La pass from Powo. His father was away on a trading expedition in Kham and his older brother had gone to study in Beijing, as was the custom among noble families.

When Bhakha Tulku and his family members reached Chimdro, they stayed for a month as guests of Jedrung the second. Afterward, he travelled to Kundu Dorsempotrang and, over the next several months, to Rinchenpung and the lower Tsangpo valley, looking for a place where they might settle.

In Medok, plans changed abruptly when Bhakha Tulku received news from Dudjom Rinpoche that he was to begin a rigorous course of study at Mindroling Monastery, in Tibet. After Bhakha Tulku Rinpoche entered Mindroling, his mother and father returned to Powo. Fighting with the Chinese broke out in 1958. His father headed the local Powo resistance and commanded a militia of seven hundred men. His father, his mother, and other family members all died during the political events in Tibet.

In 1959, Bhakha Tulku Rinpoche fled over the Himalaya to Bhutan with his tutor, and later to India, where he studied later at the school for young tulkus in Dalhousie.

Bhakha Tulku Rinpoche served Dudjom Rinpoche for 7 years as an attendant and secretary, and received from him the whole Dudjom Tersar lineage, the Rinchen Terdzö, the thirteen cycles of Pema Lingpa and many other teachings.

Receiving teachings from many masters

Bhakha Tulku Rinpoche has also received many teachings from:

Bhakha Tulku Rinpoche also holds the Dzogchen lineage of the Namchö tradition, the Longchen Nyingtik and the Chetsün Nyingtik.

In India, in 1969, Bhakha Tulku Rinpoche married Sonam, the daughter of the second Jedrung, Thinley Jhampa Yungney, who had settled in Tezu in Arunachal Pradesh.

Among his main students is his nephew Tulku Orgyen Phuntsok.

Bhakha Tulku Rinpoche has taught in India, Nepal, Bhutan, Tibet, Taiwan and the United States, and is the founder of the Vairotsana Foundation in the US.