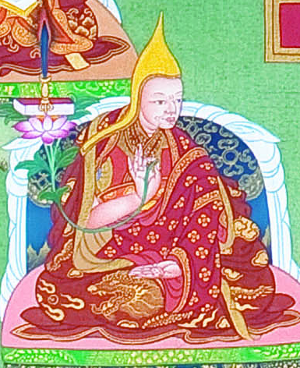 Born into an ethnically Mongolian family in the Tsongkha region of Amdo in 1717, Changkya Rolpé Dorje was recognized at the age of four as the reincarnation of Changkya Lobzang Chöden. Following disturbances in Amdo and the destruction of his home monastery of Gönlung, he was taken to the imperial court in Beijing where he received a thorough education from a number of masters. He travelled to Lhasa, accompanying and receiving teachings from, the Seventh Dalai Lama, Kalzang Gyatso, in 1734, and the following year, in 1735, he was fully ordained at Tashilhunpo Monastery and received the name Yeshe Tenpé Drönmé from the Panchen Lama, Lobzang Yeshe. Following the sudden death of the emperor, Yung-cheng, he returned to the imperial court in Beijing.

At the request of the new emperor, Ch'ien-lung, he oversaw a project to translate the Tengyur into Mongolian. The basis was a glossary Changkya had compiled called The Source of Learning (Wyl. dag yig mkhas pa'i 'byung gnas). In 1757, Changkya travelled to Lhasa again, where he played a key role in identifying the Eighth Dalai Lama and wrote the Seventh Dalai Lama's biography.

His seven volumes of writings[1] include a classic work on philosophical tenets,[2] the famous A Song on the View to which Mipham Rinpoche composed a commentary[3], and a guide to Wutai Shan[4].