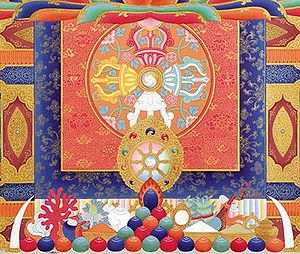 Double vajra on throne brocade from a tangka of Buddha Shakyamuni

In the cosmographic description of Mount Meru a vast crossed vajra supports and underlies the entire physical universe. Similarly in the representation of the mandala, a vast crossed vajra serves as the immoveable support or foundation of the mandala palace and here the central hub of the vajra is considered to be dark blue in colour with the four heads coloured to represent the four directions-white (East), yellow (South), red (West) and green (North). These also correspond to the five elements and the buddhas of the five families with blue Akshobhya in the centre.

It’s also an emblem of the green buddha of the north, Amoghasiddhi, and represents his all-accomplishing wisdom as lord of the karma family of activity.

The raised throne upon which masters are seated when teaching is traditionally decorated on the front by a hanging square of brocade displaying the image of a crossed vajra in the centre, often with four small swastikas in the corners. This emblem represents the unshakeable ground or reality of the Buddha’s enlightenment.[1]