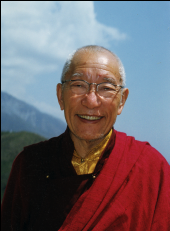 He was born in Lithang, in the Kham province of Tibet. At the age of 8, Rinpoche was recognised as the reincarnation of his predecessor. In 1959, Rinpoche came to exile in India along with tens of thousand Tibetan refugees. In 1962 Rinpoche, at the age of 34, was summoned to Dharamsala by His Holiness the Fourteenth Dalai Lama to assist in efforts to establish the Tibetan community in exile.[2]

Khamtrul Rinpoche then served as the General Secretary of the Council for Cultural and Religious Affairs, before he retired in 1987. After that, Rinpoche remained His Holiness the Dalai Lama's consultant on Nyingma affairs but also travelled extensively around the world, promoting the interests of the Tibetan people and giving teachings in Asia, Europe and North America.

In 1991, Rinpoche established Lhundrup Chime Gatsal Ling Nyinmapa Monastery in in Mcleod Ganj, India, under the guidance of His Holiness the Dalai Lama, to provide a place for students of all backgrounds to pursue their study and practice of Buddhism. In 2005, Rinpoche opened a second Chime Gatsa Ling in Sidhpur, India, for his growing community of monks.

Khamtrul Rinpoche received certain teachings and transmissions of Tertön Sogyal's lineage from Tulku Apen, a direct disciple of Tertön Sogyal. He transmitted some of them to the Rigpa sangha on several occasions, especially Tendrel Nyesel in Lerab Ling in 1992, and Yang Nying Pudri in Dzogchen Beara in 2000.

Khamtrul Rinpoche passed into parinirvana on December 30, 2019 and remained in tukdam for more than a week.[3]