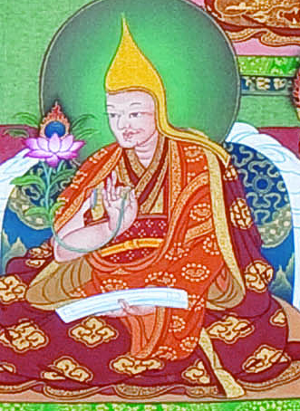 Gendün Drup (Tib. དགེ་འདུན་གྲུབ་, Wyl. dge 'dun grub) (1391-1474), a disciple of the great Tsongkhapa, is known as the First Dalai Lama. He founded Tashilhunpo Monastery in 1447.

Born into a simple nomadic family of Tsang, Gendün Drup would become an incredibly learned and realized master. According to legend, while young he was watched over by a crow, an emanation of Mahakala.

He left home to become a monk at the age of seven, studying in the Kadampa tradition. After meeting with Tsongkhapa in 1415 in Central Tibet, he became one of his closest disciples. After Tsongkhapa's passing away only four years later Gendün Drup devoted himself to fulfilling his teachers vision and worked to establish and organise the monastic community which Tsongkhapa had established. One of his greatest achievements was the establishment of Tashilhunpo Monastery at Shigatsé.

Having made such a great contribution to the establishment of the Gelug school, he passed away aged 84 amongst many auspicious signs.

Two centuries later he was posthumously awarded the title of First Dalai Lama.