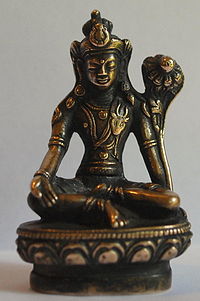 Khasarpani (Skt. Khasarpaṇi; Tib. ཁ་སར་པའ་ཎི་, Wyl. kha sar p'a Ni) — a form of Avalokiteshvara with one face and two hands. His right hand is in the mudra of supreme generosity, and the left is often in the mudra of teaching the Dharma and holds a lotus blooming at the level of his left ear. Iconographically, Avalokiteshvara Khasarpani is often indistinguishable from the seated form of the meditational deity called Amoghapasha (Unfailing Lasso). They are often conflated in both Sanskrit and Tibetan texts and practices.

The great Tertön Chokgyur Dechen Lingpa discovered an image of Avalokiteshvara Khasarpani made from a bone of Yeshe Tsogyal as the sacred body representation for his ter Padma Tsuktor. This image was last known to be in the treasury of Rumtek Monastery during the lifetime of the 16th Gyalwa Karmapa Rangjung Rigpé Dorje.