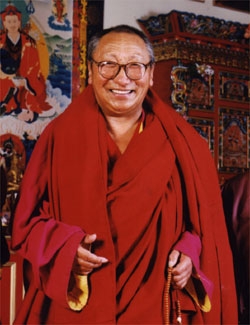 At the end of the Cultural Revolution, he was invited to the Dzogchen Shri Singha Buddhist College in Sechuan Province, where, after a period of training, he became Head Khenpo. He also established a shedra at his own Pugong Monastery. Many of the monks at Pugong Monastery follow the Kagyüpa tradition. Over 200 monks at the Pugong Monastery receive full training in the Nyingma tradition. Khenchen Pema Tsewang regularly visited Shechen Monastery, where he gave teachings as part of the annual summer retreat for the monks.

He was invited to teach at the Tibetan Buddhist College in Bejing, established by the previous Panchen Lama, where teachings from all four schools of Tibetan Buddhism are given and many Rinpoches are trained.

Khenchen Pema Tsewang was not only widely respected as one of the most learned scholars of Buddhist philosophy, but also as someone who embodied the qualities and way of life of a true bodhisattva.