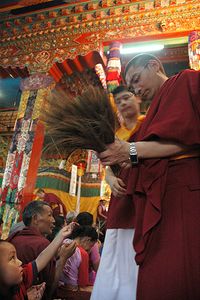 Kusha grass, also called darbha (Skt. kuśa; Poa cynosuroides or Desmostachya bipinnata; Tib. ཀུ་ཤ་, Wyl. ku sha) — a variety of grass considered sacred in India. The Buddha used this grass to make the meditation seat on which he attained enlightenment under the bodhi tree. For this reason it has a particular symbolic significance in Buddhist practice and is used in various rituals.

It is also sacred for Hindus. The plant is mentioned in the Rig Veda for use in sacred ceremonies and also as a seat for priests and gods.