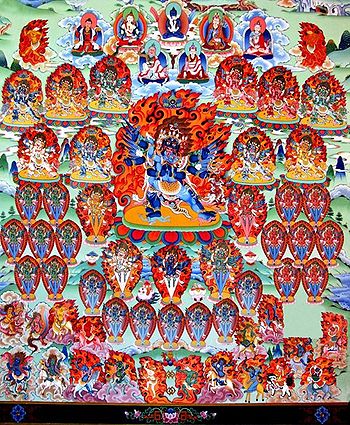 Namchak Pudri (Tib. གནམ་ལྕགས་སྤུ་གྲི་, Wyl. gnam lcags spu gri) ‘The Meteoric Iron Razor which Vanquishes Māra’ is a Vajrakilaya terma practice which was revealed by Dudjom Lingpa in 1862 from several treasure sites in Eastern Tibet. Along with the Pudri Rekpung, Namchak Pudri is one of the two main Vajrakilaya practices of the Dudjom Tersar lineage.

Dudjom Rinpoche composed more than two volumes of texts for the Namchak Pudri, the whole of volumes Tha and Da of his Collected Works, as well as part of volume Za. Among all these texts are especially:

Out of the many wonderful traditions of Vajrakilaya, the Dudjom Namchak Pudri (The Meteoric Iron Razor which Vanquishes Māra) is one of the most extensive and profound. It carries the full consecration of the practice lineage. It is a spiritually direct revelation of special potency today. It integrates sacred words from the root Vajrakilaya tantras with key components of the principal Vajrakilaya lineages, and enlightened scholarship of the Vajrakilaya commentarial traditions’.

The Namchak Pudri contains especially elaborate teachings on the Four Phurba Transfixions (phur bu thal 'byin bzhi), which are the condensed essence of all Vajrakilaya transmissions[2]:

Dudjom Rinpoche wrote[3] in the full Ritual Manual for the Namchak Pudri:

Vajrakilaya's supreme and common siddhis are bestowed with ease and the potency of (his) compassion is especially swift compared with other yidams. Thus, (he) is certainly the unique secret heart deity of all the accomplished vidyadharas of India and Tibet.

Vajrakilaya is a wrathful form of Vajrasattva, the pure vajra nature of Enlightenment. In this imagery, the compassion of the Buddhas is expressed forcefully, to eradicate in a powerful way the entrenched ignorance and emotional afflictions which cause obstacles, interfering with auspicious circumstances and preventing the dawning of realisation. Thus, the symbol of compassion is the phurba or phurbu, the ritual dagger which stabs the obstacles and hostile forces of embodied ignorance, and transmits their consciousness to the Buddha fields.”

Later, during the 20th century, Dudjom Rinpoche (1904-1987), incarnation of Dudjom Lingpa (1835-1904) arranged the Namchak Pudri Vajrakilaya practice on the basis of the materials found in the ‘Tukdrub Sangwa Gyachen’.

The name ‘Namchak Putri’ is derived[5] from the Vajrakilaya revelations of Rigdzin Düddul Dorje, who is included in the Dudjom Incarnation Line.

“Dudjom Rinpoche took on responsibilities for preserving, editing and developing the Nyingma scriptural and practice corpus of texts. This work included editing and composing fresh texts for many of the principal Vajrakilaya traditions. Thus, in compiling the Dudjom Namchak Putri and making his own contributions to it, Dudjom Rinpoche drew upon his vast enlightened scholarship and practice experience in the Vajrakilaya traditions, as well as his own wisdom, and the vision of the original Treasure revelation.”