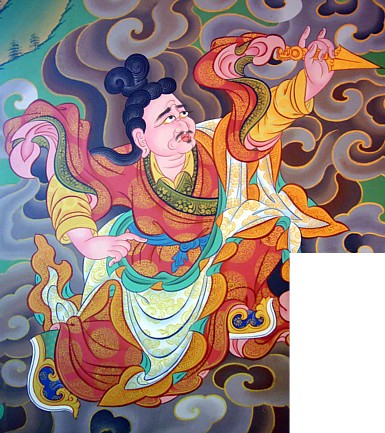 Nanam Dorje Dudjom (Tib. སྣ་ནམ་རྡོ་རྗེ་བདུད་འཇོམས་, Wyl. sna nam rdo rje bdud 'joms) (8th-9th cent.) — one of King Trisong Detsen’s ministers, sent to Nepal to invite Padmasambhava to Tibet. He became one of Guru Rinpoche's main twenty-five disciples. When receiving empowerment from Guru Rinpoche, his flower fell on the mandala of Vajrakilaya. Through the practice he became an accomplished mantrika, who could fly with the speed of the wind and pass through solid rock. The name Dorje Dudjom means ‘Indestructible Subduer of Mara.’

He is also the root incarnation of

Oral Accounts of the Life of Nanam Dorje Dudjom