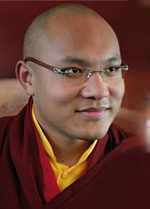 Ogyen Trinley Dorje (Tib. ཨོ་རྒྱན་འཕྲིན་ལས་རྡོ་རྗེ་, Wyl. o rgyan 'phrin las rdo rje), His Holiness the 17th Gyalwang Karmapa (b. 26 June 1985), is the spiritual leader and head of the Karma Kagyü tradition of Tibetan Buddhism, one of the four major lineages of Tibet. Karmapa is considered to be one of the most important Tibetan lamas after His Holiness the Dalai Lama and has been acknowledged as one of the most brilliant representatives of a new generation of spiritual leaders. He has a modern and pragmatic view while at the same incorporating the Buddhist spiritual tradition, its culture and Tibetan values. The 17th Karmapa currently lives in Gyütö Monastery near Dharamsala, the seat of the Tibetan government in exile and the residence of His Holiness the Dalai Lama.

Ogyen Trinley Dorje was born into a nomad family, in 1985 in the Lhatok region of Kham, Eastern Tibet. In the late spring of 1992 a group of Karma Kagyü lamas, searching for the reincarnation of the 16th Karmapa, discovered the young boy by following instructions left by the previous Karmapa before his death. His Holiness the 14th Dalai Lama issued a formal letter, supporting the recognition of the boy as the 17th Gyalwang Karmapa, and the Chinese Government supported the choice too.

Ogyen Trinley Dorje returned to the Karmapa's seat of Tsurphu Monastery in June of 1992. At Tsurphu, the Karmapa began his studies in Tibetan of the Buddhist sciences of mind, ritual, and the sacred arts, such as dance. Each day he also gave audiences to hundreds of visitors from across Tibet and around the world. He soon began to bestow empowerments and participate in various rituals at the monastery. In addition, while His Holiness was at Tsurphu, the monastery underwent extensive rebuilding to restore the temples, shrines, stupas, a shedra, and residences that had been badly damaged during the Cultural Revolution and then neglected over the years, fulfilling another of the duties of a Karmapa.

However, in order to exercise his future role, His Holiness needed to receive all the empowerments and transmissions of the lineage, and he was unable to do so in Tibet since many of the Kagyü lineage teachers were living in exile in India. With this in mind, the Karmapa organized his escape from Tibet at the age 14, crossing the perilous Himalayas in mid-winter.

On January 5, 2000 the 17th Karmapa arrived in Dharamsala, India, where he was met by His Holiness the 14th Dalai Lama. A year later, in 2001, he received refugee status from the government of India.

During the 13 years he has lived in India, His Holiness has followed his traditional monastic training and philosophical education, but has also been studying other subjects, including English language and Science.

As a scholar and meditation master, as well as painter, poet, songwriter and playwright, the Gyalwang Karmapa continues the whole range of enlightened activities associated with Karmapas over the centuries.

In addition, as an environmental activist, computer enthusiast, and world spiritual leader whose teachings are often webcast live, the 17th Gyalwang Karmapa is someone who is acutely aware of the problems of today, and has brought the wisdom and compassion of his unique lineage fully into the 21st century. For example, in November 2009, His Holiness was invited to speak at a TED conference in India, becoming the youngest person ever to do so, at that time.