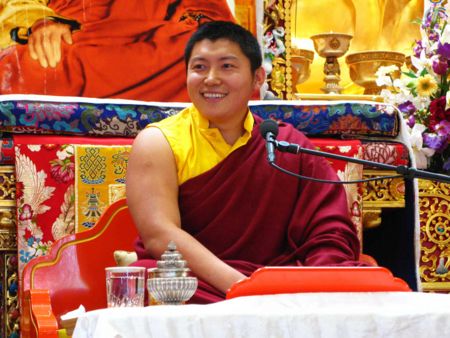 Kyabgön Phakchok Rinpoche (Tib. སྐྱབས་མགོན་འཕགས་མཆོག་རིན་པོ་ཆེ་, Wyl. skyabs mgon 'phags mchog rin po che) (b.1981) — a lineage-holder of the Chokling Tersar, the Profound Treasures of Chokgyur Lingpa from the Nyingma School of Early Translations. He is also one of the throne-holders of the Riwoche Taklung Kagyü lineage.

Rinpoche was born in 1981 to Tsikey Chokling Rinpoche and his wife Dechen Paldron. His grandfather was Tulku Urgyen Rinpoche and he is the elder brother of Khyentse Yangsi Rinpoche. Recognised at a young age, Rinpoche received an abundance of transmissions, empowerments, and instructions from great masters such as Dilgo Khyentse Rinpoche, Dudjom Rinpoche, Penor Rinpoche and Trulshik Rinpoche. Moreover, from Tulku Urgyen Rinpoche and Nyoshul Khen Rinpoche, whom he considers his main root gurus, Rinpoche received direct instructions on the nature of mind. He was awarded the title of khenpo after taking just seven years to complete the traditional nine-year curriculum in Buddhist philosophy at the Dzongsar Institute of Advanced Buddhist Studies in Bir, India.

Presently, Phakchok Rinpoche is abbot of several monasteries in Nepal. He lends assistance to various monasteries and practice centres in Tibet, presides as head of numerous dharma centres in North America and Asia, and teaches widely at centres around the world. Through organisations such as the Chokgyur Lingpa Foundation, he energetically oversees a wide range of humanitarian projects in South Asia. He is also the vajra master at Ka-Nying Shedrub Ling Monastery in Kathmandu, Nepal.

As a yogi-practitioner with a family who also carries responsibility for monastic institutions, Rinpoche is deeply acquainted with both these walks of life and paths of practice. His teachings are direct, lively, and practical, with a strong emphasis on the view of the Great Perfection, on the uncontrived meditation free from concepts that is Mahamudra, on the tireless implementation of the bodhisattva’s conduct, and on the Mahayana instructions on wisdom and compassion.