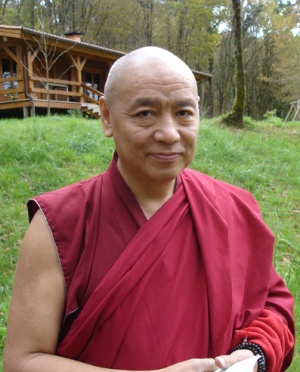 Rangdrol Rinpoche (Tib. རང་གྲོལ་རིན་པོ་ཆེ་, Wyl. rang grol rin po che), aka Tsawa Rinam Rinpoche, is the second son of Kangyur Rinpoche. He was recognised by Dilgo Khyentse Rinpoche as the incarnation of Tsawa Rinam Namgyal, one of the principal disciples of Jamyang Khyentse Wangpo and Jamgön Kongtrul, and also as an emanation of Namkhé Nyingpo, one of the closest disciples of Guru Rinpoche, who went to Tibet in the eighth century and was himself an emanation of the great master Hungkara, one of the eight Eight vidyadharas of India.

Rangdrol Rinpoche teaches regularly in the traditional three-year retreats of Chanteloube, in Dordogne, France and from time to time leads group retreats. In addition to teaching, he spends a large portion of his time in meditative retreat, thus continuing the activity of his father Kangyur Rinpoche. His teaching activities take him to various countries in Europe: France, Portugal, Finland, Holland and elsewhere. Rangdrol Rinpoche also gives much support to the work of Songtsen. He is also one of the main teachers and directors of the monastery of Orgyen Kunzang Chökhor Ling at Darjeeling in India.