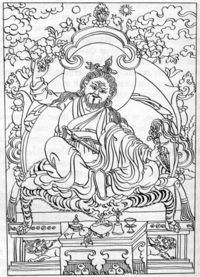 Revelation of the terma

The Sherik Dorje Nӧnpo Gyü recounts how Dudjom Lingpa experienced Kuntuzangpo directly in a vision, giving teachings and answering questions to his own emanation's retinue of bodhisattvas. According to Alan Wallace[1]:

The Teacher, Kuntunzangpo appearing as the Lake-Born Vajra, explains to Dudjom Linpa how all the wordly appearanes and mindsets we take to be real actually manifest like apparitions — reified by our grasping—without even an atom of true existence. But the sharp vajra’s power and blessings bring natural liberation, whereby all phenomena are recognized as spontaneously actualized displays of primordial consciousness. To accomplish this level of realization, we are instructed to focus on the essential points of practice, clearly distinguished in succinct terms.

The text has eight chapters:

According to Alan Wallace[2]:

A master piece of profundity and brevity, the “Sharp Vajra of Awareness Tantra” presents the complete path to perfect enlightenment in a mere 250 lines in the original Tibetan. Composed in crisply elegant verses to facilitate memorization and daily recitation, this tantra is a poetic encapsulation of the Dzogchen view, meditation and conduct. The ‘sharp vajra’ is discerning wisdom that recognizes all phenomena to be empty of inherent existence, demolishing the mountains of our concepts and collapsing the false shelters we erect out of hope and fear. This consummation of pristine awareness is present in the ground of being, which transcends all extremes of conceptual elaboration and is called the Great Perfection. All spiritual vehicles and fruitions are subsumed within the primordial consciousness that knows reality as it is and perceives the full range of phenomena

Nyoshul Khen Rinpoche wrote: "Dudjom Rinpoche studied the tantra Sherik Dorje Nӧnpo Gyü, and the dynamic energy of his awareness welled up as the sublime knowing that discerns the true nature of phenomena. He easily and very naturally understood the difficult points of the vast classes of tantras of the Vajrayana path"[3].