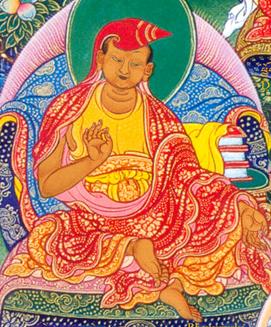 Svatantrika (Skt. Svātantrika; Tib. རང་རྒྱུད་པ་, ranggyüpa, Wyl. rang rgyud pa), 'Autonomous Syllogism' — a subschool of Madhyamika inaugurated by Bhavaviveka in his commentary upon Nagarjuna's Root Verses of the Wisdom of the Middle Way.

In the Nyingma tradition of Mipham Rinpoche, the Svatantrika are defined as "followers of the Madhyamika who teach by emphasizing the categorized absolute involving assertions".[1]

According to the Svatantrikas, there are two kinds of relative truth: the correct and the incorrect. Correct relative truth refers to phenomena that are undeceiving in terms of their characteristics, i.e. able to perform their particular function. For example, fire, which is hot and burning. The incorrect relative includes phenomena which appear yet do not function as they appear, such as the moon’s reflection or a drawing of a lamp.

The Svatantrikas divide the absolute truth into the conceptual and non-conceptual.

The Svatantrikas are divided into early and later: Acharya Shrigupta belongs to the earlier; Jñanagarbha, Shantarakshita and Kamalashila, the so-called ‘Three Eastern Khenpos’ belong to the later.