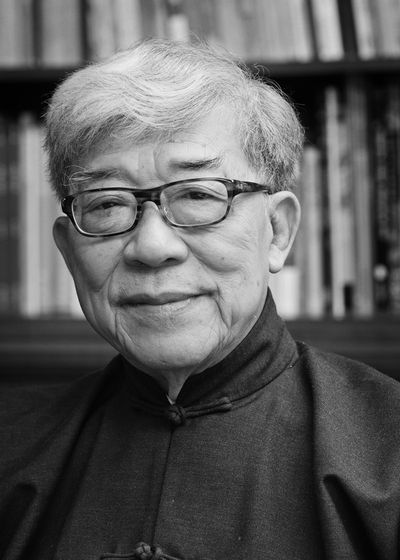 Master Tam Shek-wing (b.1935) is a Buddhist scholar, painter, poet and writer. Founder of the Vajrayana Buddhism Association and Sino-Tibetan Buddhist Studies Association in North America, he is a direct student of Dudjom Rinpoche and received systematic training from him.[1]

Master Tam Shek-wing was born in Guangdong, China in 1935. At childhood, he followed senior family members to practise Oriental Esoteric Buddhism. He was immensely interested in Buddhist texts ever since at the age of twelve while entering into the Western Sect of the Taoist practice (道家西派).

In the 60s, he started learning Tibetan Buddhism when he was converted in Taiwan under Master Chu Yung-kuang (屈映光上師), a disciple of Norlha Rinpoche (諾那上師) as well as Gangkar Rinpoche (貢嘎上師), and was bestowed with the teachings of the Riwoche Monastery. Later, Master Chu suggested Master Tam to contact one of his disciples in Hong Kong, Master Lau Yui Chi (劉銳之上師). Subsequently, Master Tam joined The Hongkong Vajrayana Esoteric Society founded by Master Lau. From 1972 onwards however, Master Tam was practising the Nyingma teachings under the direct instruction of H.H. Dudjom Rinpoche and was ordained Vajra Acarya of the Nyingma School at the age of 38 by Dudjom Rinpoche. He moved to Hawaii in 1986, and resides in Canada since 1993.

Under the guidance of Dudjom Rinpoche, Master Tam successively received transmitted instructions and is the lineage-holder of, among others, the following five principal Nyingma teachings:

In 1984, Master Tam was ordered by Dudjom Rinpoche to spread the Dharma teachings in his designated mission regions, namely North America and Mainland China.

In recent years, Master Tam initiated the organization of the Sino-Tibetan Buddhist Studies Association in North America, which was joined by more than twenty international scholars in the discipline. He is a professor at Renmin University of China where he gives video course lectures attended by graduate students from Beijing University, Tsinghua University, Capital University, and Beijing Nationality University. Most recently, he became a board member of the Academic Advisory Board, Faculty of Nationalist Studies of Tsinghua University[2]

Master Tam is an assiduous writer, being the author, editor and translator of over 80 works in Buddhism. His other writings spread over Yijing, Chinese astrology, Feng Shui, fine arts, gastronomy and social critics. Wong Ting Tze (王亭之) is one of the most well known pen names of Master Tam for the above subjects.