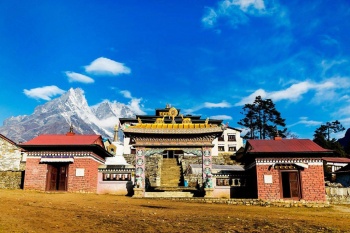 The monastery is located on the southern slopes of Mount Everest, situated at 3,867 metres (12,687 ft), and is the largest gompa in the Khumbu region of Nepal.[1]

It was built in 1916 by Lama Gulu, a student of the 10th Dzatrul Rinpoche, Ngawang Tenzin Norbu with strong links to its mother monastery Rongpuk Monastery in Tibet, on the northern slopes of Mount Everest.

In 1934, it was destroyed by an earthquake and was subsequently rebuilt. In 1989, it was destroyed for a second time by a fire and then rebuilt with the help of volunteers and international assistance. Many items of the monastery’s extensive collection of books and paintings and relics were saved.